It was the dawn of the Eighties, or the end of the Seventies, depending upon how you look at those things. In January of 1980, having just turned 15, I decided that I needed to start chronicling my motion picture attendance. I felt that my keen critical analysis demanded to be put to paper, that future generations would benefit from my unique perspective and razor sharp deconstruction of the art form of film. So I took a hardbound 6x8.5” sketchbook, grabbed some markers and started The Motion Picture Log.

From the start, I took the Log very seriously. As with commercial books, I left the first page blank, followed it with a hand-lettered title page and a disclaimer about accompanying photos being © the respective production companies and used without permission (the photos were mostly clipped from New York Times ads procured at the Paper Shack, but more on that elsewhere). The next page held an official introduction:

The following is a list of movies I have seen over a period of several years. The entries go as follows: Title; Date, Price of Admission; Theater seen in; Number of times I saw it; Who I saw it with; The cast; General notes and what I thought of the film; Rating; And my rating of the film...
* - P-U! Awful! Terrible!
** - Eh! Pretty bad, not awful.
*** - Average
**** - Good film. Worth money.
***** - Fantastic. Great film.
Note: I am not Gene Siskel. This is not meant as a guide for the general public. This is merely a reference book for me to remember things I’ve always found the need to with movies. So what are you reading this for??? 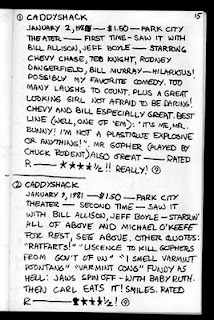 Ah, the grammatically challenged self-absorption of the teenage geek. If memory serves, a prototype volume also listed what snacks were consumed, but I guess I was at least prescient enough to realize that I wouldn’t give a crap whether I had Sno-Caps or SweeTarts with my popcorn in years to come. After a year and a half, I realized that my incisive five-star system wasn’t wide ranging enough, so I switched over to the numerical grading, penning this addendum to the introduction:

At least I didn’t switch over to a grading system that utilized the names of objects of lust at the time (“This movie was a total Jan Smithers!”).

The first movie entered in the first volume was STAR TREK: THE MOTION PICTURE (which may have dictated the formal “motion picture log” tag instead of the more colloquial “movie diary” or “flick journal”).

For the record, I saw STAR TREK on January 5th, 1980 with my pals Bill and Jeff at the Wonderland Cinema in Lancaster PA and the ticket cost four bucks. I noted the cast (it wouldn’t be until 1984 that I’d start listing the director), film rating and gave it a short review. “Great job on all cast members - esp. DeForest and the Enterprise!” Awkward syntax aside, I feel proud that I was one of the first cineasts to note the burgeoning acting ability of the federation starship. Who can forget the NCC-1701’s heart wrenching turn as the blind gospel singer in THE COLOR PURPLE?


STAR TREK: TMP rated four and a half stars. I often waste time trying to determine the protocol of things that are entirely open. It’s MY frickin’ Motion Picture Log, I can rate movies on a sliding scale of bacon to rocking chairs if I want, but I seriously debated whether or not “halves are allowed.”

When I moved to the 1-10 grading system, I retroactively re-graded the films in the log, and the movie was given an 8. Which now seems a tad high. I think I’d bump that down to a 7 or perhaps a 6 and a half (if halves are allowed). And in fact, at numerous places throughout the Motion Picture Logs, initial ratings have been crossed out and replaced with one reflecting second thoughts.

My Pauline-Kaelocity continued. The Kristy MacNichol / Tatum O’Neal virginity flick, LITTLE DARLINGS evoked this passionate critique: “Eh! Some of this film was good, but other parts stank.” Upon viewing THE SHINING, I noted, “Although it isn’t an exact adaptation of Stephen King’s novel, it is fantastic.” Which is funny because I’d never read the book. That summer I saw THE EMPIRE STRIKES BACK five times (despite having the climactic twist spoiled in advance) and I deemed the “sfx well up to par,” which was really pretty low in 1980. 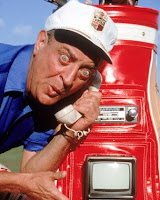 In that first year, I also included “Interludes.” The first one came early in 1981, after two screenings of CADDYSHACK, where I wrote three and a half pages worth of memorable quotes from the comedy, including “Thank you very little,” “No one likes a tattletale, Danny…. Except of course, me,” “Hey baby, you wanna earn 14 bucks the hard way?,” “You want your fat?” and my personal favorite, “Don’t sell yourself short, judge… you’re a tremendous slouch.” What I couldn’t predict at the time was how superfluous this transcription was… to this day, myself and millions of other dorky men (and a few women) can practically recite the whole of CADDYSHACK verbatim.

The second “Interlude” tried to make up for the oversight of not starting the Motion Picture Log at a younger age. Omitting kiddie fare such as BEDKNOBS & BROOMSTICKS, I retroactively rated as many pre-Log movies I’d seen in a theater as I could remember, bestowing solid 10s on JAWS, NATIONAL LAMPOON’S ANIMAL HOUSE, SUPERMAN: THE MOVIE and ALIEN, while the lowest grades went to WHEN A STRANGER CALLS, SGT. PEPPER’S LONELY HEARTS CLUB BAND and THE SWARM.

It’s also worth noting that a large percentage of the movies in the first volume were seen at the Park City Cinemas, situated in the bottom floor of one of the secondary arms of the local mall where my friends and I hung out every Friday after school. The Park City Theater had two screens, one dedicated to discounted second-runs of mainstream fare, the other showcasing what the marquee out front referred to as “Two Adult Hits.” For those of you born after Jimmy Carter left office, lemme explain. In the days before home video and the internet, most people got their porno fix at actual movie theaters, frequented primarily by businessmen on lunch, unemployed guys with nowhere else to go and taxi drivers trying to impress Presidential campaign volunteers. It was always hilarious to watch the men buy their tickets and hide their faces as they rushed behind the black curtain into the no doubt stickier side of the cinema (they almost never paused for popcorn). 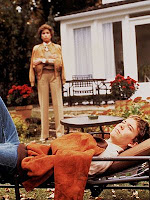 For those of us still in High School, the cool thing about the Park City Cinemas was that its mere presence and cheap ticket price ($1.50 in 1980) meant that we went to see almost anything that was playing. Sometimes it was something we’d already seen (like SUPERMAN II, which got bumped up to six times listed in the Log), but every so often we’d plunk down to view something that our little teenage sensibilities might not have otherwise: ORDINARY PEOPLE, FORT APACHE, THE BRONX and ABSENCE OF MALICE being three examples. Of course, I didn’t like any of those movies (saying about ORDINARY PEOPLE, “Okay – not great, in my opinion.”), but at least I saw them!

Some of my reviews took on a poetic simplicity. In regards to HALLOWEEN (in re-release), I decided “Best victim, but kinda dense: Jamie Lee. Jerk: Donald Pleasance.” I called BRUBAKER “realistic as hell,” and who should know the penal system better than a teenager from rural Pennsylvania? Well, at least I had the cinematic good sense to realize, even back then, that SMOKEY AND THE BANDIT 2 was “not nearly as good as the first one.”

My review of CHARIOTS OF FIRE, over three decades later, evokes a stinging regret, not because I didn’t appreciate the film, but because it reminds me of how rude my friends and I were at the showing. I wrote, “We were pretty much in stitches at some of the performances… there’s really not a lot to say about this; It was good and we were unusually obnoxious. So much so that at the end, a man in front of Chris turned around and stared at him and a woman commented ‘obnoxious kids’ when she left. Heh. Sorry, but oooo, we were soooo funny!!!”