Talk to the hand... lettering

Of all my beefs with modern mainstream comics, computer coloring and lettering are near the top. I’m not enough of a purist / luddite that I think those two steps in the comic art process should still be done by hand; certainly computers have made those jobs not only easier, but given the artists a much broader palette in which to work. The problem comes from a frequent lack of judiciousness on the part of the colorist or letterer.

A lot of times the color artist gets so excited about the full spectrum of colors and effects that there’s no restraint, resulting in overdone, garish, distracting color, enhanced with gradients, flares and all kinds of effects. The resultant busyness is exacerbated by the lack of panel-separating gutters and margins in modern comic books, creating an overall cluttered look to the page.

Lettering, as I’ve stated before, just looks better to me when done by an artist with a pen. The organic expressiveness of hand lettering is far more appealing to these jaded fanboy eyes than the rigidity of fonts, even dynamic ones.

Still, I get why captions and dialogue balloons are done using typeface. I can even see the appeal of computer lettering for sound effects. But I have a hard time understanding when computer lettering is used to illustrate writing that is done by the hand of a character in the story.

I picked up a few of DC Comics’ new first issues from their rebooted universe, and the results have been a very mixed bag (see my 50 WORDS OR LESS… blog for reviews). BATGIRL #1 is one of the better entrants, and I’m happy to see Babs Gordon back on her own two feet. The story (by Gail Simone) is promising and Ardian Syaf and Vicente Cifuentes’ art is pretty damn great… except for a few details that stuck out like nipples on a batsuit.

The very first panel shows the villain (a guy named The Mirror who seems to be straight out of FINAL DESTINATION) holding a list of names of people who somehow escaped death. The list is handwritten, but instead of the names being drawn, they’re typeset (presumably by letterer Dave Sharpe) in a font that approximates loose handwriting. It’s jarringly unbelievable (and probably took more time to type and lay out than if it would’ve just been scrawled in ink). 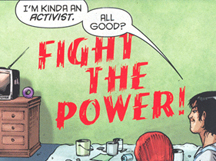 But even less convincing is a scene later in the book wherein Barbara Gordon’s new roommate shows how much of a rebel she is via a hand-painted scrawl of “FIGHT THE POWER” on the living room wall. The words were supposed to have been painted with a wide paintbrush, but are obviously, painfully printed on the wall with a font. WHY? Why wasn’t this done with a brush pen on the original artwork, or, if it’s going to reappear in later issues, wasn’t it created on paper, scanned in and saved as a Photoshop file that can be re-placed in the future? It doesn’t look like it was painted on the wall; it looks like the roommate (as yet unnamed) bought some giant vinyl letters at Staples and placed them on the wall after carefully making chalklines so they’d be straight. Not very anarchic.

Conversely, on the very next page, we see a nameplate on a desk that, for some reason, IS hand-lettered, to ill effect! Here’s an item that SHOULD’VE been done in a font for bland uniformity. It’s an odd juxtaposition.

Technology is just a tool, as much as a pen, ink or a ruler. It’s a relatively new tool as far as the comic book medium goes, and as with any new tool (or toy), there’s as much an art in deciding when to use it as how. Don’t make me quote Jeff Goldblum in JURASSIC PARK. You know what I mean.

Email ThisBlogThis!Share to TwitterShare to FacebookShare to Pinterest
Labels: comics