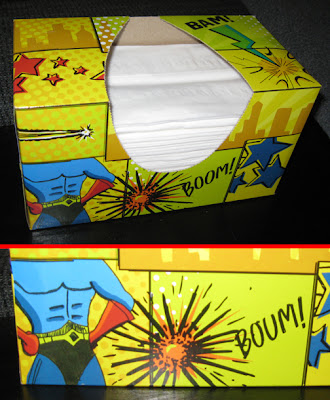 My cousin Andrew and his girlfriend Sharon (collectively and affectionately known as the Butzwingers) gave me this box of Puffs tissues as a semi-gag Christmas gift (relax, they also got me some other stuff, they’re not cheapskates). Everyone had a nice giggle and then we all took turns blowing our noses and moved on.

But take a closer look at this thing. The artwork is… horrible*. Check out the beheaded superhero figure specifically… it’s not just the bad anatomy (what is that right hand supposed to be, an oven mitt? It looks like a vuvuzela!), it’s beyond simply sketchy. The explosions, the lettering, everything looks so rushed that I have to wonder if it was printed from quick, preliminary mock-ups done by the Puffs art department. Maybe they never bothered to contract final, polished artwork. Or maybe someone asked their 10 year old who loves Spider-Man to draw it? It’s only stupid comic book art, who cares?

Apparently, this was produced for the Canadian market (as bi-lingual sound effects—the other side has a scrawled, “Vlan” being French for “Bang”—and provenance on the bottom indicate), but it also made its way onto a supermarket shelf in central Pennsylvania. A cursory Internet search brought up nothing about this box, and I can only speculate that maybe it was some kind of test that escaped into the wild.

Regardless, there’s no excuse for packaging this ugly. However this thing came to be, dear Procter & Gamble, I hereby offer my services if you ever want to produce another comic book inspired package for any of your many personal hygiene products. I’ve got some great ideas for Tampax.

*Aside to Andrew and Sharon: I still appreciate the gift!