Why JOHN CARTER Flopped at the Box Office.

I was kinda looking forward to Disney's JOHN CARTER adaptation. I'd only read a few of the comic book versions, but Edgar Rice Burroughs' seminal sci-fi adventure set the template for every planet hopping hero from Buck Rogers to Adam Strange. Plus, any fanboy can tell you that Dejah Thoris... is hot. 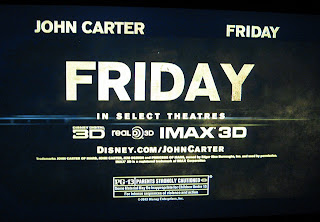 But I didn't go see JOHN CARTER and I probably won't (until it comes to cable, no doubt in a few weeks at this point). Part of it is the mostly awful reviews and word of mouth (although I don't always trust either one of those critical parameters). Part of it is the previews didn't really look all that promising. I was a little bemused by the fact that Disney (a company I hate), due to the failure of MARS NEEDS MOMS, felt that the public just held an overall animosity towards our celestial red neighbor, and thus removed any reference to the planet from the title. Yes, indeed, Disney marketing geniuses, JOHN CARTER is a much better title than WARLORD OF MARS. Idiots. The dull moniker selected by the cowed company makes the film sound like a biopic about an accountant.

But the other night, while catching up on some tee-vee via the DVR, I saw this ad for the film (which aired back when there was still hope that the century-old character could inspire a new generation in his first major media adaptation), and it all became clear.

The movie flopped because people had no idea when it was coming out. When the hell is Frida Y?

It's called kerning, people. And it matters. And in fact, the letter spacing on the whole word is messed up. Look at the distance between the F and the R, then compare that to the I and the D. There's no consistency whatsoever (the Y is kerned at the top "Friday," but the other discrepancies remain). For a design aberration like this to come from a media giant is inexcusable. Who set this bumper, a Thern?
1 comment: