From the 1960s through today, superhero fans have generally had to espouse a preference for one of the two major mainstream comic book publishers, aligning themselves with either DC or Marvel. While I certainly read my share of Marvel books (SPIDER-MAN, FANTASTIC FOUR and CAPTAIN AMERICA to name a few), I was always a DC Comics guy. The fictional universe that held Superman, Batman, the Flash, Green Lantern, the Teen Titans, Wonder Woman, Aquaman and their B-list brethren just connected with me more than Marvel’s angst-ridden roster of superheroes. Superman liked life. Batman at least internalized his conflict. Every single Marvel hero was always whining about something.

I think I reacted more positively to DC’s editorial sensibility, even though it was very much in flux at the time. DC’s Bronze Era books reflected a creative struggle between the old guard (comics veterans who often disdained their field as disposable pap for children) and the new breed of hippie upstarts (who saw comics as a vital and vibrant art form capable of tackling sophisticated subject matter), and this infusion of energy into a formerly staid universe created a sensibility that was simultaneously comforting and challenging, searing itself into my consciousness. Also, DC’s covers often featured their super-stars in iconic poses, creating indelible poster-like images that this wannabe cartoonist loved to redraw.

As for the other publishers, I read a bunch of Harvey Comics’ kiddie fare through elementary school. Gold Key Comics often utilized paintings for their cover art, which always put me off, predicating a life’s preference for low art over high. I liked the mid-70s run of Atlas Comics, the company begun by ex-Marvel publisher Martin Goodman, but that only lasted a few years. Charlton Comics, with one big exception, always felt substandard to me, with their often inferior artwork, cheap printing, sloppy lettering, weak design (even as a kid, I thought their logo was clunky) and mostly forgettable characters and titles. 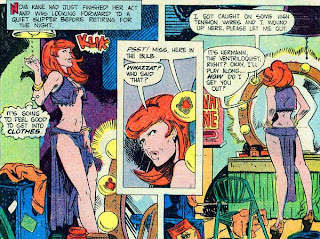 The exception was E-MAN, a truly groovy Charlton superhero comic that premiered in 1973. Created by writer Nicola Cuti and artist Joe Staton, E-man was a parcel of pure energy that wandered the universe for thousands of years before landing on Earth, ending up trapped in a light bulb in the dressing room of exotic dancer Nova Kane.

You heard me right. A superhero comic where the female lead was a buxom, red-headed stripper (her first line in #1: “It’s going to feel good to get into clothes”). The energy makes Nova smash the light bulb with her high heel and upon release, takes human form (it can assume any form of energy or matter, which is convenient), fashioning an orange and yellow costume with Albert Einstein’s E=MC2 equation as his chest emblem (which must’ve been a pain to draw in every panel).

E-Man often played like a cosmic Plastic Man, fashioning utilitarian tools from his limbs, altering his shape to battle otherworldly giant brains, underwater despots and omnipotent farmer’s daughters. It was a truly weird combination of sci-fi, superheroics and sex. Implied, to be sure, but E-MAN featured more sexuality than any other superhero comic of its time. In issue #2, Nova makes breakfast while wearing only jeans and a purple short-sleeved shirt, completely unbuttoned and hanging open to show a hint of breast.

Certainly, Nova Kane awakened something in me, but she was hardly the only comic book female to nudge my pubescence into bloom. Not so much the ladies of DC and Marvel, as, clad in skintight spandex or not, they usually lacked any kind of sexual identity due to the moral restrictions of the self-imposed Comics Code Authority. Sure, Wonder Woman may have spent a lot of time being bound and gagged while wearing a bustier and high heels, but everyone knew that Steve Trevor had been suffering from a case of blue balls since he began relentlessly pursuing his “angel” in 1941.

No, my comic book crushes mostly lived in Riverdale, in the seemingly chaste and innocent world of Archie Comics. Anyone who’s never actually read an Archie comic probably has this image of a LEAVE IT TO BEAVER kind of whitewashed, suburban, sexless milieu, but that wasn’t exactly the case, thanks primarily to an artist named Dan DeCarlo. 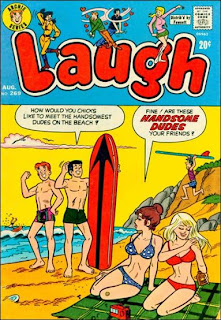 After cutting his teeth drawing MILLIE THE MODEL and other working gal comics for Atlas / Timely / Marvel in the 1950s, DeCarlo became a pre-eminent pin-up cartoonist for the Humorama line of girlie magazines. When he moved to Archie in the late 1950s, his clean, expressive cartooning style quickly became the new model for the Riverdale gang. But Dan brought his pin-up sensibility along for the ride as well—albeit with the necessary breast reductions—as well as a modern esthetic that put the gang into actual contemporary fashions (a rarity in comics). For the first time, these characters felt real.

Betty and Veronica—and let’s not forget Josie, Melody, Sabrina and THAT WILKIN BOY’s girlfriend Samantha—modeled bathing suits and mini-skirts and ran around barefoot in cutoff jeans and peered coyly over their shoulders through batted eyelashes as the boys fell over each other trying to win their affections. On many a comic book cover, the girls posed seductively on beach blankets while Archie, Reggie and dozens of anonymous extras literally knelt at their feet to do their bidding.

There are a few particular DeCarlo covers that resonated so strongly with my budding pubescence that they still make me feel a little… odd… when I see them. One of them, LAUGH COMICS #269 (Aug. 1973) depicts Archie and Reggie preening in front of two nameless bikini-clad hotties, asking, “How would you chicks like to meet the handsomest dudes on the beach?” The women are distinctly unimpressed, as the brunette with her hair in a bun and a flower appliqué just above her knee dismisses, “Fine! Are these HANDSOME DUDES your friends?” (Meanwhile, in the background, the girl-hating Jughead races towards the water with his surfboard). Even at the tender age of nine, I shared Archie’s priorities. These girls were hot, and since they weren’t any of the established cast of characters, their personalities were left to the reader’s imagination. Were they really aloof… or just playing games? My mind boggled.

As I graduated from elementary school to junior high, peer pressure began to mount to abandon such childish pursuits as THE AMAZING SPIDER-MAN and SWAMP THING. We were almost teenagers, we were supposed to ditch the kid stuff and start caring about rock music and boobs. I kinda liked rock music. I definitely liked boobs. But I still liked comic books more. And I really didn’t care what anybody else thought.
_________________________________________________________________
from the forthcoming book, COLLECTOR'S EDITION: Confessions of a Pop Culture Obsessive-Compulsive by and ©Karl Heitmueller Jr.
No comments:

I dunno... is it me, or does this just seem wrong? 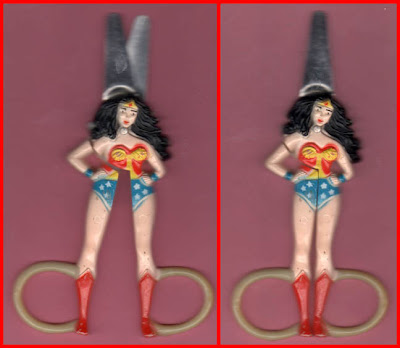 I love when Archie Comics tackled rock and roll in the silver and bronze eras... sometimes they captured the correct "vibe" (as the Seeker used to say), but often it would be obvious you were reading the works of middle aged men who didn't really get it. This page from ARCHIE'S JOKE BOOK #116 (1967) is a hilarious example that falls somewhere between. Fred Andrews isn't really showing disdain for the music, but it's obvious that the artist didn't spend a lot of time doing research on what the bands actually looked like. Is that Bob Dylan or Beethoven? I may post more Archie Rock & Roll strips if I find the time to do some scanning... 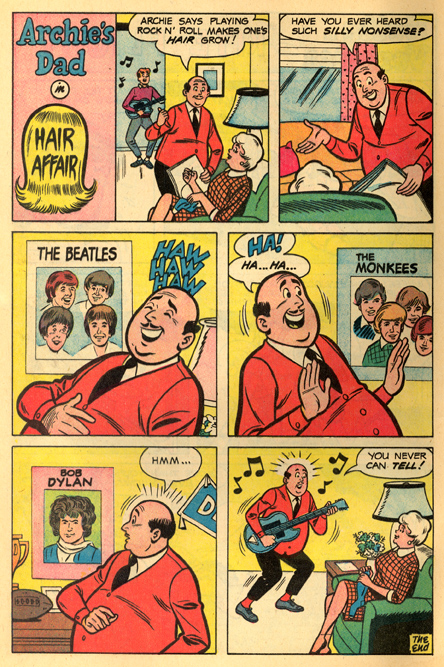 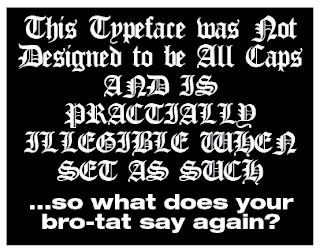 In the 1980s, I published a fistful of my own comics, two issues of a superhero book entitled THUNDERSTORM, followed by six issues of an anthology book called BEAT COMICS. I've never posted anything from any of those comics on my art site, TOUGH GUY Goods & Services because they're really, really... old. At some point, I may put samples from some of the better stuff on here, but for now I wanted to share one of the nice side benefits of making your own comics back in the day.

Through my friend Amy, I got to meet Stephen DeStefano, a cartoonist whose DC Comics book, 'MAZING MAN (with writer Bob Rozakis) was one of the few whimsical highlights of the dawn of the Dark Age of Comics. I sent Stephen copies of my stuff and we became sorta pen pals for a while. The highlights of Stephen's letters were drawings he included of some of my characters. It was as big a thrill to me as when George Perez drew my character Lumino for the cover of ADVENTURE COMICS #485.

Below are two of Stephen's drawings, the first being Thunderstorm with Stephen's own character, Jibby th' Nob. The second is a character created by my sometimes writing partner Nathan Pease named Homunculus. Homunculus was a secondary character in a BEAT COMICS "reboot" of our high school comic book, THE DISINTEGRATOR. Homunculus was a wannabe hero who would ride the subways of Washington DC, punching anyone who committed infractions such as smoking or littering, then giving a dollar to anyone who may have been inconvenienced. Nathan and I never finished our Disintegrator story (we should team up to wrap that up someday), but Stephen thought Homunculus was a pretty funny character.

Stephen's expressive linework is more than evident in these lovely pieces (which put anything I ever drew to shame). He's one of those rare comic books artists who doesn't think "cartoonist" is a pejorative term.

These days, Stephen and I live in the same town (well, neighboring towns) and I see him every once in a while. Like most friendships these days, we primarily communicate via Facebook. Stephen does storyboard work for animation and the odd comic job now and then (he's also the official artist for most pieces of Popeye merchandising you see). You should pick up LUCKY IN LOVE, a perfectly lovely tome he illustrated for George Chieffet. 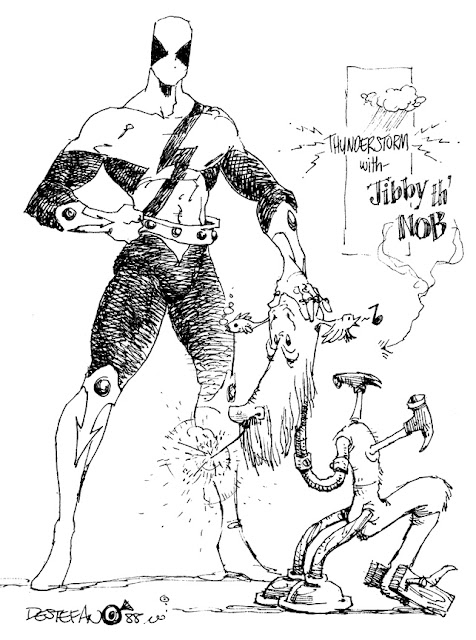 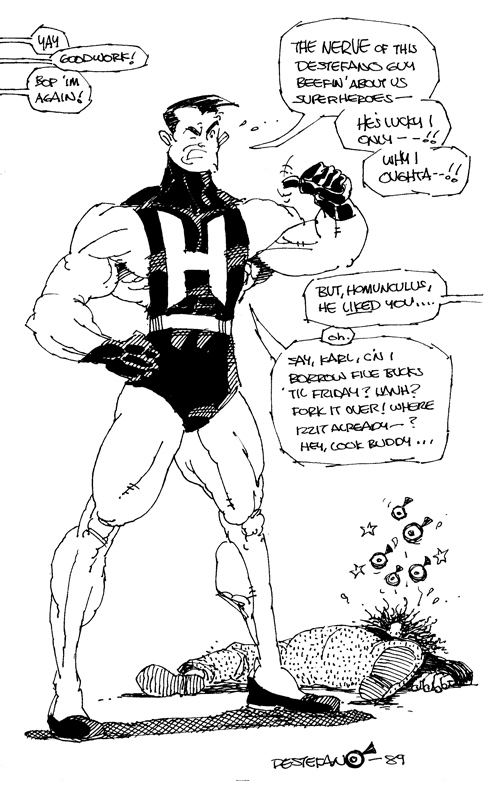