With Great Power... (the 10 Best Superhero Movies of All Time)

As the Avengers finally assemble, bringing the biggest superhero movie yet to the big screen, we have to ask: Of all these darn superhero movies, which ones are the best? Luckily, we can also answer that question we just asked ourselves. Let the debate commence!

10) THE SHADOW (1994)
A lot of movies could’ve taken this spot on the list, but for the sake of mixing things up, I’m going with this oft-dismissed adaptation of the classic radio / pulp / comics hero (many will argue he’s not a superhero, but he fits the criteria). Director Russell Mulcahy crafted a moody, stylish art-deco period piece and the story (in which the Shadow battles the would-be world conqueror Shiwan Khan, nicely played by John Lone with a fantastically over-the-top Tim Curry as one of his minions) displays a deft balance of old-school melodrama and humor. The film’s considered a campy trifle by many fans of the character, but its real problem—and it’s a big one—is a horribly miscast lead; the smart alecky Alec Baldwin is incapable of conveying the kind of chilling dominion personified by Orson Welles in the 1930s radio show. If "The Shadow" featured a more fitting star (imagine Daniel Day-Lewis or Rutger Hauer), it would probably be held in higher regard.

9) WATCHMEN (2009)
Zack Snyder’s adaptation of Alan Moore and Dave Gibbons’ celebrated superhero deconstruction gets a bad rap. Hardcore comics purists felt that putting the exhaustive graphic novel to film was a Quixotic endeavor to begin with and complained about the alterations to the climax. Neophytes couldn’t get a lock on the hyper-specific frame of reference required to fully appreciate the film’s style and substance. But open-minded fanboys (who understand the definition of the word, adaptation) appreciated “Watchmen” for honoring the meat and the minutiae of one of the greatest super-stories ever told.

8) THE ADVENTURES OF CAPTAIN MARVEL (1941)
It’s a wee stretch to place this Republic Serial—the first live action adaptation of superhero—on this list, but of all the caped do-gooders to hit the big screen in the Golden Age, Captain Marvel (recently renamed “Shazam” by DC Comics after decades of being mistaken by most people for his magic word) came the closest to reproducing the unlimited effects of the period’s comic books. While the 12-part story (pitting Cap against a villain named the Scorpion) differs in substance and tone from the source comics, it’s an exciting, exotic tale buoyed by simple, but awesomely effective stunts and effects. Too bad the other super serials of the 40s weren’t this good.

7) X2: X-MEN UNITED (2003)
Conventional wisdom was that an X-Men movie could never be made to the satisfaction of both the demanding fanboy and a non-geeky mainstream audience, but Bryan Singer proved that premise wrong with 2000’s thoughtfully streamlined “X-Men.” The sequel picked up where the first film left off, amping up the metaphorical resonance of the social outsider longing for acceptance while sacrificing none of the epic action. The addition of Alan Cumming’s Nightcrawler, unleashing of Hugh Jackman’s Wolverine and promise of the resurrection of Famke Janssen’s Jean Grey as the Phoenix only whetted the appetites for the third entrant (which, under Brett Ratner’s hand, unfortunately fell like the Angel… er, Icarus).

6) BATMAN BEGINS (2005)
In 1989, comic book fans soiled their underoos over Tim Burton’s “Batman,” a movie that placed the Caped Crusader in a dark context for the first time in any adaptation. But in fact, despite being a cultural phenomenon, “Batman” was a pretty lousy movie (as were its sequels to one degree or another). The Chiropteral palate was cleansed in 2005 by Christopher Nolan’s reboot, which placed the Darknight Detective in a realistic (as possible) context. Taking inspiration from various iconic comics, Nolan and his screenwriting partners envisioned a corrupt urban landscape beyond normal means of salvation; Christian Bale’s Batman—for the first time onscreen—truly strikes fear into the hearts of criminals. A stellar supporting cast adds to the heft, and could only hint at the greatness to come...

5) IRON MAN (2008)
The question of whether or not a B-list comic book character could fill the cineplex seats was answered with wit and style in Jon Favreau’s whip-smart adaptation of Marvel Comics’ Golden Avenger. As personified by the perfectly-cast Robert Downey, Jr., Tony Stark was maybe the most believable superhero alter-ego of them all, his brilliance and courage mitigated by a self-destructive arrogance and narcissism. Yet Downey made him relatable and likable. Maybe most amazingly, the improbable technology of the comic book armor was rendered believable by an army of effects artists who made us believe that a man could fly in a high-tech suit made of metal, powered by a miniature arc reactor.

4) SPIDER-MAN 2 (2004)
The reason there are three sequels on this list is that superhero movies often benefit from not having to retell an oft-known origin story in a subsequent outing. Sam Raimi’s second Spidey film draws on some classic Marvel Comics storylines as Peter Parker struggles with his desire for a normal life beyond the responsibility his great power demands. Alfred Molina’s Dr. Octopus is a perfectly layered bad guy, while Tobey Maguire’s ego pushes for more screen time sans the full face mask of the web slinger. The CGi effects are far superior to the first film’s videogame swinging scenes, and the whole thing has a goofy sincerity to it that makes it feel like a timeless chunk of pop culture (sadly, the same cannot be said of the studio-co-opted third film).

3) THE INCREDIBLES (2004)
The only one of these ten films not based on an established property, “The Incredibles” is just too good to leave off this list. Credit writer / director Brad Bird, who proved he knows from heroes with 1999’s “The Iron Giant.” Sure, the exploits of Mr. Incredible and his family of “supers” are merely dressing on a story that’s more about the importance of family and embracing who you are, but few superhero movies feature the kind of panache, heart and thrills that fill this Pixar flick. Bird (who graduated to live action features with last year’s “Mission: Impossible - Ghost Protocol”) has stated that he’s not really interested in doing another superhero movie, but many fanboys would love to see him take the reins of a live adaptation of some beloved character or team (If “The Justice League” ever gets made, I can think of no one better to tackle it).

2) THE DARK KNIGHT (2008)
Christopher Nolan’s sequel took everything that was great about “Batman Begins” and upped the ante tenfold. “The Dark Knight” works on every level, as an action film, a superhero movie, a crime drama, a character study and an intense psychological thriller. At its heart is the key tenet of Batman’s character (one that was callously ignored in Tim Burton’s plodding exercises in style)—the line he will not cross, his refusal to take a life, no matter how vile. Yes, Christian Bale’s growling can be funny if taken out of context, but every performance in this film—not just Heath Ledger as the Joker—carries the weight of a person pushed to his or her limit. Nolan may be the single best mainstream filmmaker of his time; he’s a modern day Hitchcock, able to communicate his distinct vision to all of his collaborators and create smart, stylish, emotionally moving motion pictures that are also fun. Simply put, “The Dark Knight” is a masterpiece and its snub for Best Picture (and Director) in ’09 is one of many reasons I never take the Oscars® seriously. 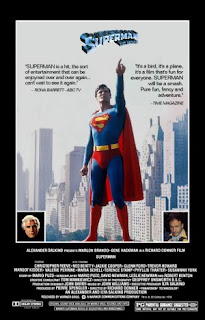 1) SUPERMAN (1978)
Richard Donner’s groundbreaking 1978 blockbuster set the standard for the modern superhero movie (so much so that it’s hard to find a filmmaker’s commentary on any entrant in that genre since that doesn’t reference it). While there are certainly some plot holes and jarring tonal shifts in both story and acting, the film as a whole treated its source material with affection and respect (a first for a movie based on a comic book), evoking nothing less than a modern myth. On top of that, Superman’s pre-CG flying effects necessitated creating entirely new filmmaking technology. And, of course, Christopher Reeve’s charming, laid back performance proved that you could still employ genuine acting chops dressed in red, blue and yellow spandex. Is it a perfect film? No, but it’s the only one on this list that’s a certifiable classic, and without it, this countdown might not even exist.