NOTE: It's been over a half a year since I posted an excerpt from this loooooooooong-delayed book. Real life has very much gotten in the way, but I'm happy to say that I'm currently working on the final chapter. Fingers crossed it will actually be published before books no longer exist in hard form. This excerpt is from the chapter on collecting action figures, and picks up with a discussion of what the adult collector action figure boom of the late 1990s wrought:

...Little plastic replicas of obscure superheroes your girlfriend never heard of became commonplace: Sandman (both the Golden Age version and the Vertigo Comics goth icon), Black Canary, Zatanna, Amazo, Starman… forget B-Listers, these were D and E-listers! Eventually, deals were finagled with external licensors that allowed DC Direct to create figures of their most popular characters (Batman, Superman, Wonder Woman) as well. And suddenly, I had a new reason to hit comic books stores on at least a semi-regular basis. 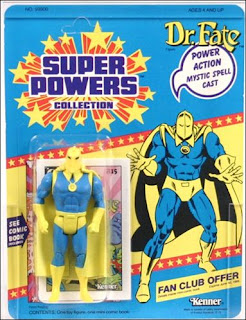 But while it’s awesome to be able to own (as of this writing) eleven different Dr. Fate figures, the rush of finding that character’s improbable first Super Powers figure was much greater. Like everything else in our current culture, the ease with which cool action figures can be found has taken something away from the collecting experience. Aside from one maddening obstacle…

There is one aspect of modern toy store foraging that is beyond frustrating for the geeky collector, and that is the ransacking of the toy aisles by collectible dealers. Many eBay sellers of such geek-fare take advantage of the fact that lots of collectors don’t live near a Target or a Walmart (who sometimes sell figures exclusively manufactured for sale in their stores), and buy every single figure the second they’re placed on the pegs.

To get the pick of the shipment, these dealers will often cultivate an “in” at the big box, sometimes even buying new figures before they even make it to the toy aisle. So, if, for example, I was looking for that Marvel Universe Dr. Strange figure at Target for its normal $9.00 price, odds are it was already purchased by some reseller hoping to get at least $15.00 for the item.

Since most comic book stores cannot meet the minimum orders required to deal directly with distributors of the major toy manufacturers, if they want to carry Mattel or Hasbro’s lines of DC and Marvel superhero figures (and most of them do), they are forced to either go through a distributor (adding a middleman cost to the unit) or also buy them off the shelves at Target, Walmart or Toys-R-Us, then mark them up from the retail price.

It’s quite aggravating to see a designated section at a department or toy store for a new line of figures that is completely empty, then walk into a comic book store and see those figures for up to 50% more than the suggested retail price.

There’s also a certain amount of role-playing that goes on when buying superhero toys at the same place you buy your toilet paper and Doritos. Odds are any time I roll my cart into the action figure aisle at Target, there’s going to be some parent there, either with or without child, trying to pick some new plaything for Billy or Susie. I’m sure that most of the time, they—and no doubt the cashier as well—assume that I’m likewise flipping through the pegs shopping on behalf of some offspring, not to add to my own museum of arrested adolescence. No doubt a few exceptionally perceptive shoppers can spot a grown geek (particularly if I’m also wearing a Superman t-shirt), but not many. 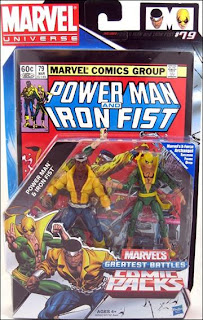 I’m not ashamed of any of my passions. I never have been. But as much as I own my geekhood, I’m unlikely to turn to that attractive young mother and say, “Excuse me, have you seen the Power Man & Iron Fist Marvel Comics Battle Pack anywhere around here? I really need that for myself!”

If, however, I have to share the aisle with another fanboy—we can always and easily spot other members of our rarefied fraternity —things can get pretty competitive. You have to quickly scan the shelves for that rare figure, rather than take a leisurely perusal of the aisle. I have seen envious, nerdy eyes lasering the lone example of a rare item in my shopping cart. Sorry, Chester! I saw that glow-in-the-dark Spectre variant first! Nyah, nyah!

The standard collector’s mentality states that the most—and for some people, only—desirable condition for an action figure (or any toy) is what they call MIP, MOC or NRFP…. which are acronyms for Mint In Package, Mint On Card and Never Removed From Package.

It’s easy to understand why MIP would make a vintage toy more collectible. Few kids in the 1960s debated whether or not to remove their G.I. Joes from the Marx packaging because they had an inkling if they never played with it, it could help pay their mortgage forty years later. Somehow, though, unmolested toys from the past have survived (perhaps unsold warehouse finds, or the ignored toy surplus of a bored, spoiled rich kid?) and fetch ridiculously huge prices on the collector’s market. A 1973 Mego Batman figure in the box is worth upwards of $500 while the same figure in opened, played-with condition can be had for a tenth of that.

“Kids today” may not consume music, TV or comics the same way I did, but one thing that hasn’t changed is that no child leaves his toys MIP. And even though I would dearly love to still have my old long-destroyed toys, if I never took them out of the boxes, would I have such nostalgia for them? Doubtful. That kind of emotional connection with an inanimate object happens only from using the darn thing. 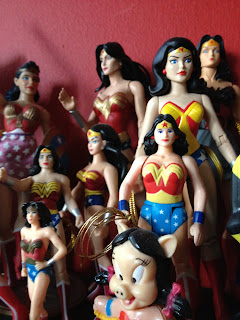 There are some collectors who keep figures in the package because they prefer the full esthetic of the unopened toy. But usually, if someone doesn’t remove the toy, it’s because they plan to re-sell it at a later date. There’s a huge difference between someone who collects for profit and someone who does so for pleasure. If the reason you want a Major Matt Mason is because it’s a highly-sought after, impossible to find item whose value is only going to go up, you absolutely want to have it in pristine condition in the original packaging. But if you covet this ultra-cool artifact of the space age out of nostalgia and/or genuine affection, condition becomes less important.

Even as an adult collector with a cognizance of monetary value, I still reject the MIP philosophy. To me, action figures just look better standing free amidst their plastic crimefighting brethren on a shelf. You can’t get a full appreciation of a beautifully detailed little Superman when he’s encased in a plastic bubble, shackled with wire to a backing card. As such, every single one of my 500+ action figures is ARFP: Always Removed From Package.

Yeah, 500+. Not sure how that happened. I guess that as my new comics buying waned over the past decade, I needed something geeky to suck up the disposable income, and action figures (both new store-bought toys and old ones acquired via eBay and flea markets) fit the bill. But the irony is, I don’t really consider myself a major action figure collector. It’s just that the sheer volume of good stuff out there in the 21st century means that even a “discriminating” fanboy such as myself racks up a lotta plastic (in more ways than one).
_________________________________________________________________
from the forthcoming book, COLLECTOR'S EDITION: Confessions of a Pop Culture Obsessive-Compulsive by and ©Karl Heitmueller Jr.

Have you spoken with Brian over at Plaid Stallions to see if he would publish Collector's Edition?