DC Comics' mystery titles of the Bronze Age were a decidedly mixed bag. While the writers were neutered by the Comics Code as to how terrifying and gruesome they could be (the words "horror" and "terror" were banned, as well as zombies), the artwork, by legends such as Neal Adams, Alex Toth, Gray Morrow, Bernie Wrightson, and many more elevated many otherwise forgettable stories. And the covers were often worth the price of admission alone. Below is a gallery of eight awesome covers for THE WITCHING HOUR, and anthology title hosted by three witchy sisters (two ugly, one hot). The first one came out the same month I started reading comics, but didn't enter my collection until years later. The final one, however, is one of those iconic books I can remember picking off the spinner rack thanks to that bewitching (sorry) montage cover by Nick Cardy. Dig in!

NOTE: Okay, I know, enough with the excerpts already! Well, not quite. While most of the book deals with the collector's mentality and the consumption of pop culture, there are also parts that detail my attempts to create my own. This excerpt deals with UP, the underground newspaper that my friends and I did in high school. There are some pseudonyms herein. See if you can spot 'em.

Nathan was also a part of the most important bit of self-publishing I ever did, a project that had very little to do with comics, and one that brought both of us lots of local infamy and very nearly got us kicked out of high school.

In addition to the official school paper, The Flash, Hempfield High published a smaller monthly publication for the underclassmen, The Franklin Friar. The Friar was about ten Xeroxed pages of light (and usually out of date) school “news” stories, movie and music reviews, puzzles and drawings. The Friar was also, by pretty much all accounts, a joke. Most copies ended up unread in the homeroom garbage can as soon as the bell sounded the start of first period.

Some friends and I were on the staff of The Franklin Friar, and felt that it was a missed opportunity. The “real” school news was being published in The Flash, so why not take advantage of our utter lack of journalistic responsibility and make something the students actually wanted to read? We approached the teacher advisor for The Friar and asked if we could revamp the paper into more of a combination pop culture / humor publication, with more art, cartoons and creative writing.

We were summarily and soundly rebuffed. The Friar was considered a training ground for The Flash, someplace that wannabe journalists could hone their skills before joining that illustrious publication when junior year rolled around. The advisor took the “newspaper” very seriously, even if absolutely nobody else did.

No problem, my friends and I thought. We’ll just start our own paper.

The prototype—four pages, single-sided Xeroxes stapled on the side—was called The Not Yet Award Winning Forum, and opened with a pretentious introductory editorial declaring ourselves the voice of the students—pseudonymous though we were—battling against the evil, conservative mediocrity of the official school paper. The remaining three pages were simply a snarky spoof of The (award-winning) Flash, parodying the pedantic writing style of the official school paper. “The Not-Yet-Award-Winning Forum Goes to a Restaurant” delineates in excessive detail the simple act of buying and eating food at a fast food joint (“Next, we removed our food from their packages, except for the drinks, because they are liquid and would have spilled all over the place.”).

The Forum didn’t exactly cause a stir, but that might be because we only printed ten copies. Having gotten the vitriol against The Flash out of our system, we didn’t produce another issue.

But when we became juniors the following year, that urge to stir the pot reared its head again, and the same group of malcontents regrouped for a second shot at an underground newspaper. Only this time, we did get some notice, partially because for this go round, we ditched the pseudonyms for our real names.

The reason we didn’t feel we had to hide behind false identities was that we did our research and (to paraphrase a Clash song not yet written) knew our rights. One of my fellow founders, Arthur, had a lawyer for a father, and he advised us as to the rules we had to follow to do this thing right: 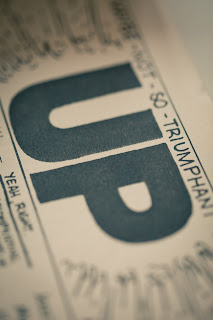 1. The paper had to be produced entirely outside of school, using no school materials.
2. It could not contain any profanity or nudity.
3. (And this was the more subjective mandate) The paper could not cause any interference with the educational process.

Confident that we could work within those guidelines, before we published our first issue, we went so far as to schedule an after-school meeting with the principal of the high school, a surly, balding disciplinarian named Mr. Knuckletoad. Three of us sat at one end of a long table in the administration conference room, while Mr. Knuckletoad sat at the other end, leaning back in his chair, arms folded against his chest. We plainly outlined our plans, to publish and distribute a monthly alternative newspaper to the students on the upperclassmen side of the school. We told him of our desire to create a satirical, humorous paper with an emphasis on pop culture and things that mattered to the students more than the rather staid content of The Flash. Mr. Knuckletoad rocked back and forth on his chair with the most sanctimonious, dismissive smirk on his face I had ever seen. He half-heartedly thanked us for being open with him, disingenuously wished us luck, and sent us on our merry way.

We could tell that Mr. Knuckletoad wasn’t taking us seriously, which only strengthened our resolve.

The first issue of UP (which stood for either Unofficial Publication, Underground Paper, or Under Pants, depending on our mood) was handed out to unsuspecting students at the beginning of February, 1981. The six single-sided pages featured political and social satire, music reviews, a page of stolen comic art and cartoons, and some hilariously stern anti-government polemics. A few of the pieces—including a lame political cartoon spoofing the mania over tying yellow ribbons around trees to show support for the Iranian hostages, and a rather dry editorial about the misuse of the schools’ study group resources—followed the more traditional school paper format.

The writing was largely hit-or-miss and self-absorbed, and not just because we were teenagers. We also lacked an editor. Each contributor was given one full page to fill however they saw fit. I did most of the layout work, typing up other people’s handwritten contributions and adding art (sometimes drawn by me, sometimes by another contributor, and frequently aggregated from some comic book or magazine). My former comic book partner, Nathan, was the only other regular contributor who always did his entire page by himself, adding handwritten coded notes to his girlfriend and graffiti-style artwork.

After everyone’s contributions were laid out (by pasting the typed half-page columns onto a letter-sized sheet of paper), I would take a marker and add filler to the holes, jotting down lines from songs or movie quotes or various doodles. I usually did the masthead logos as well, but some issues featured full covers by whomever’s turn it was to get the front page that month (another sign of UP’s attempts at democratization). 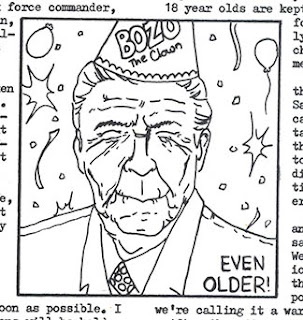 When the layout was done, I would go (with either Arthur or Nathan) to a local office supply store and run off copies of each page on a 10¢ per page copier, one of those cheap early ‘80s machines that couldn’t print a solid block of black no matter how much toner was pumped into its gullet. We started out printing—if memory serves—about 50 copies of UP, making our cost per issue $30.00, which was paid for by the contributors.

I took the copied pages home and collated them in my parents’ living room, stapling each issue in the top corner with my little red plastic Tot stapler. The next day, recovering from paper cuts and the odd stapling blister, I’d bring the pile of UPs into school, where the contributors would meet me at my locker to receive their allotment for distribution. Issues would be passed out before homeroom and between classes, but never in class, as that would be disruptive of the learning process (of course, we couldn’t stop students from reading it during class, now could we?).

By the third issue, we were starting to find our voice. I, for one, was loosening up, hewing less to standard tropes and embracing the anarchic tone of an underground. When we heard some grumblings from the school administration about a “disrespectful” piece in UP #2 that broke the news that then-President Ronald Reagan was “old,” I followed it up with a caricature on the cover of #3 that pictured Reagan in a Bozo birthday party hat, with the caption, “Even Older!”

Nathan’s stock in trade was a kind of surrealist humor, while Arthur carried aloft Excalibur, fighting the conformists and the anti-intellectuals making our lives a constant Hell. My old Spider-Man spoiler pal, Larry (a veritable Libertarian from an early age) alternated between music reviews and defending the Constitution.