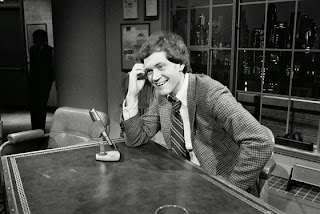 When I was in college, I was obsessed with David Letterman.

I had first discovered the gap-toothed smart-ass on Johnny Carson’s TONIGHT SHOW, and would stay up late in high school whenever Dave was the guest host. The summer before my junior year, Letterman’s NBC morning show was like a blast of caffeine before I was addicted to the real thing. So when LATE NIGHT WITH DAVID LETTERMAN premiered in 1982, I was an instant acolyte.

During my freshman year of college, my roommate was a very studious fella who made sure he was in bed by 11pm every night. My priorities were slightly different. I was determined to never miss an episode of LATE NIGHT. At 12:30 AM, every night, I would turn on the little black and white TV that lived on a stool at the foot of my bed, turn down both the volume and the contrast as low as possible, and lie with my face as close to the screen as possible in order to not disturb my far more industrious roommate. Of course, my frequent bursts of laughter meant there was a fair amount of rustling and huffing coming from the other side of the room.

I loved Letterman so much so that I audiotaped segments from the program. Hours and hours and hours of monologues, remote segments, and guest spots filled over 30 volumes of Maxell 90 minute cassettes called DAVE! (emphasis on the exclamation point).

When I bought a VCR, the recording shifted to compiling video segments. To this day, I’ve got blurry old VHS tapes of Dave showing off his record collection, sparring with Harvey Pekar, playing with gravity, bantering with Paul Shaffer, pestering people on the street (either himself or via Larry “Bud” Melman), interrupting THE TODAY SHOW, celebrating Christmas with his (fake) family, cringing awkwardly at Pee Wee Herman, mocking small town news, enraging Chris “Guy Under the Seats” Elliott, and reading viewer mail (although, sadly, never one of the literally dozens of letters I sent in myself).

I was a faithful LATE NIGHT viewer through Dave’s entire tenure. During the so-called Late Shift Wars, it was no contest whose side I chose. Not that I disliked Jay Leno… believe it or not, kiddies, back in the 1980s, Leno was one of the best stand up comedians working, particularly when he’d appear with Letterman as his foil. Leno was angry and smart and (hardest to imagine now) cynical about practically every aspect of American culture. 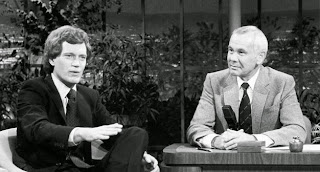 But Letterman was the heir apparent to Johnny Carson. Taking inspiration from Carson, Steve Allen, and other comedians who were always a few steps ahead of both their guests and the audience, Dave evolved into the best talk show host on the tube. Being a fan of Letterman didn’t just make you feel like you were one of the coolest kids in the room, but also—even better—one of the smartest.

When Dave moved to CBS, I tuned in for a little while, but as so often happens when things become institutions, I grew to take David Letterman for granted, and eventually moved on (to THE DAILY SHOW and THE COLBERT REPORT). I’d watch a show every once in a while (mostly if for a guest I wanted to see), but for the most part, David Letterman was a part of my television viewing past.

Even after he announced his retirement, I was far more invested in what was to come after Dave left than the end of his run. I consider Stephen Colbert a freakin’ genius, a true renaissance talent, and (despite mourning the end of the indispensible COLBERT REPORT), I got very excited about the prospect of what he might do with the entrenched late night talk show format.

Sadly, I am not a fan of the program that replaced COLBERT on Comedy Central. I was skeptical that THE DAILY SHOW’s Larry Wilmore could carry an entire program on his own, but gave THE NIGHTLY SHOW more than a shot. Saddled with a forced format (ohhh, that “Keep it 100” thing is the worst), middling guests, and (as evidenced by their frequent appearances on the overstuffed panel segment of the show) a way too young and unfunny writing staff, the already awkward Wilmore chuckled his way through way too many weak shows to warrant a spot on my DVR.

And so I decided to go back and give Dave my attention as he wound down his 33 years on the air. And holy shit, I wish I’d have tuned in sooner. Granted, these last weeks have been loaded with A-list guests (even if some of them have been more self-serving [Tom Hanks] or just rambling drunk [Bill Murray]), but the monologues have been great, the musical guests—well, some of them have been good—and the retrospective pieces (Fun with a Car Phone) reminded me why I fell in love with Letterman in the first place.

I am, in case these blogs haven’t made it obvious, a bit of a nostalgic. Like Kim Kardashian is a bit of a narcissist. The end of LATE SHOW WITH DAVID LETTERMAN has unleashed a flood of memories of how much I worshiped the man and his show (See above for a rambling sycophantic piece I included in the second issue of my self-published BEAT COMICS in 1986). It’s also filled me with regret that I took him for granted and practically ignored him during his years at CBS. But the difference between the ‘80s and now is that even though I don’t have any homemade recordings of LATE SHOW, at least I can make up for lost time via YouTube. 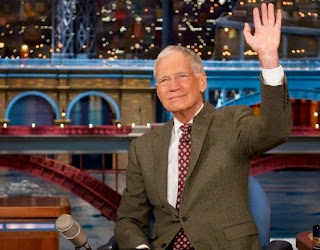 Still, despite the endless odes to Dave’s genius from fans and contemporaries, and a reign that lasted longer than Johnny Carson’s, his retirement can’t carry the weight that it deserves, due simply to the changing landscape of television. Today, not only are there scads of late night talk shows, most of them are hosted by guys who traffic in the same kind of rebellious snark that Letterman defined. We just have to remember that they all learned it from the master.

The final episode of LATE SHOW WITH DAVID LETTERMAN played out pretty much as I expected, if not exactly what I’d hoped. There were plenty of laughs (most of them at the expense of the host). But there was a marked lack of emotion and sentimentality. At least until the montage that ran over Foo Fighters’ playing “Everlong” (Dave’s favorite song). As images from both the NBC and CBS shows sped by, I found myself remembering the jokes that accompanied the stills (Eddie Murphy commenting on a blimp that had nested between his legs: “Actually, that is about right”), and, predictably, tearing up as I reflected on another part of my life when nobody in pop culture meant more to me than Dave Letterman.

But maybe this classic bit from LATE NIGHT sums it up better than I can.

So, long Dave. Thanks for everything. Okay, Stephen. You’re up.

Email ThisBlogThis!Share to TwitterShare to FacebookShare to Pinterest
Labels: for real, lover, TV