In the early 2000s, I fell out of love with independent cinema. Or rather, independent cinema that dealt with how shitty real life can be. In a span of five weeks, I saw HEAVEN, ROGER DODGER, FAR FROM HEAVEN, and THE HOURS, four movies that were so dour and depressing that I yelled (internally), “ENOUGH!” and began a transition into mostly going to see movies that were an escape from the misery / monotony of existence, not a reflection (or amplification) of such.

I’ll still check out some of these films when they come on Netflix or Ye Olde Cable Channels (to which I still happily subscribe). Unlike going to the theater or paying for download, there’s no commitment. If something loses me halfway through (like SILVER LININGS PLAYBOOK or LES MISERABLES [the latter of which lost me way earlier than halfway]), I can just stop watching, delete it from the playlist, and move on with my life.

There is one big downside to my theatrical viewing habits, in that I come to most conversations about film a year late. For someone who fancies himself kind of a pop culture pundit (I’ve actually been paid for my opinions and even spewed them on TV a few times), tardy pontification is kind of a drag.

Now (to paraphrase, um, Bill Cosby, sorry), I told you that to tell you this: I really, really hated BOYHOOD. 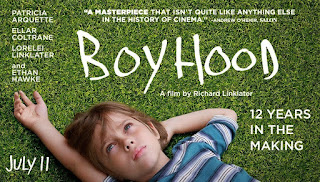 The other night, via Showtime, I finally got to see this much-beloved, highly celebrated 2014 slice of, uh, life. I like Richard Linklater, but this movie just didn’t call to me when it hit the multiplexes last year. And, man, were my instincts right.

Certainly, I appreciated the time and dedication that went into the project. Making a movie about a young person aging 12 years in real time is a major feat in and of itself. But that’s all it is. This felt less like a movie than it did a cinematic exercise. In fact, I kept thinking the closest thing I could compare it to was Gus Van Sant’s shot-for-shot remake of PSYCHO (a project that was such a cinematic jerk-off it even added masturbation to the script). I get why both directors wanted to make both films. I just don’t think they needed to share either one with the public.

At the risk of sounding like a philistine, my main beef with BOYHOOD echoes that of most of its scant chorus of naysayers: nothing fucking happens.

Okay, that’s a bit reductive. Things happen. Two hours and forty-five minutes worth of things happen. But almost none of them are interesting. And most of the actual drama that does pop up disappears in the next time jump with little or no resolution. There is absolutely no narrative arc. Here’s what happens: A kid from a broken family grows up to be a kinda artsy, angsty teen. The end. Oh, should I have said, “Spoiler Alert?” Sorry. 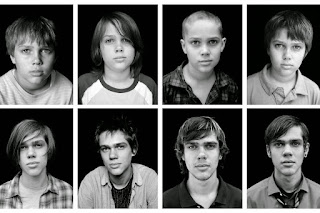 Look, I understand the nigh-impossibility of writing a traditional three-act screenplay for a film that’s going to be shot over more than a decade. Linklater had no idea what was going to happen with his principals. Ethan Hawke (“Dad”) could’ve choked on a Magnolia cupcake and died halfway through filming. Hell, Linklater even had to beg his daughter (who plays the less important sister to the titular boy) to stick with the project when she lost interest after a few years.

But if the structure of your film prevents you from crafting a cohesive narrative, you’d damn well better come up with something more interesting than an endless litany of mostly banal (and sometimes achingly clichéd) “moments” (there’s a hilarious bit of mumbo jumbo in the film’s final bit of dialogue that feels like a feeble attempt to rationalize the mundanity we’ve just endured).

Certainly, this isn’t Richard Linklater’s first film that’s more talk and less rock. But I didn’t mind the relative lack of narrative in SLACKER or WAKING LIFE because at least those movies featured freaks and intellectuals mouthing some thought provoking monologues in a milieu that was somewhat less than realistic. The people who trumpet BOYHOOD as such a revelation frequently mention how much it echoes real life. Which is true… in the worst possible way. The characters are bland, there’s way too much ennui and misery, and in the end, you wonder what the hell was the point of it all?

Merely watching Ellar Coltrane age was no more of a life-affirming experience for me than noticing that the car I've had for 11 years isn't as shiny as it was when I bought it. And it’s not that I can’t relate to the navel-gazing, tortured, lovelorn, artistic lad… quite the opposite. That was me (well, sort of) when I was young. I just have zero interest in revisiting it in large part because it was horrible.

Granted, much of my antipathy towards BOYHOOD is borne out of a subjective preference for a different kind of movie. I wanna watch superheroes fighting marauding aliens or suave spies saving the world, not alcoholic professors battering their wives or an introspective teenager eating a hash cookie and howling at the desert moon. 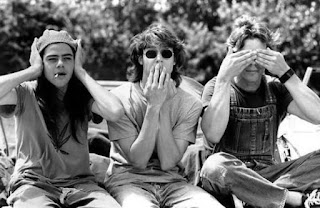 I’m not completely averse to stories set in the real world. Linklater’s own DAZED AND CONFUSED is maybe one of my top ten movies of all time (yes, really). And while you could argue that not much happens in that movie as well, you’d be wrong. There are distinct character arcs in that film, teenagers deciding what kind of people they want to be in a script that was fun and, in its own way, moving. I cared about Randall Pink Floyd and Mitch and Mike and even Wooderson.

The bottom line for me in any film, regardless of genre, is I need to have some kind of vested interest in the characters and their actions. Spectacle isn’t enough (it’s why I loved the first AVENGERS movie and didn’t like GUARDIANS OF THE GALAXY). And while it may lack CGI battles and explosions, BOYHOOD is still all about the spectacle. But it left me cold, utterly unmoved, the entire twelve years of it.

I just really hope Linklater’s not working on a sequel.