Over the years, I’ve purchased comic books in almost every way possible. I’ve subscribed to books at my local comic shop. I’ve foraged at flea markets and ordered them online. I’ve bought them at bookstores and traded with friends (I’ve yet to download an e-comic, and doubt I will, being the olde fart that I am).

But of all of them, my favorite comics buying experience remains my first: picking them off the spinner and wall racks at a newsstand or drugstore. I named my comic strip about comics PRINCE STREET NEWS after the stand in downtown Lancaster, PA that my father took me to when I was a kid in the 1970s. As I expound upon in my completed, but long-languishing in unpublished limbo book, COLLECTOR’S EDITION (it’s coming, somehow, some way, I promise), Prince Street News featured two giant, facing wall racks of comic books that formed a veritable Sistine Chapel of geekdom to my forming Id.

Naturally (and especially because it's now a thing of the past), I love old pictures of comics on newsstands. This Pops Gallery highlights the best of what I’ve found on the Internet (so far), annotated with selected covers of some of the comics for sale in the photos (painstaking, but pretty fun detective work).

A few of them merit special mention. In the first picture (from 1938), there aren’t a lot of comic books due primarily to the fact that the medium was in its infancy. It was, however, about to explode thanks to the book on display on the bottom rack: ACTION COMICS #1, featuring (of course) the first appearance of Superman. I'd point out that those three issues are worth about nine million bucks today, but there more important thing to note is that apparently this picture is a fake; In doing more research for this gallery (after I'd already posted it), I came across a forum that revealed the comic books were a Photoshopped addition. Oh, well, I'm keeping the picture in the gallery because it invokes what it must've been like to see that book on the stands.

In the photo from 1941, there’s another issue of ACTION (#35) that’s not as iconic (of course), but is special to me because I own a copy of that one. It was my high school graduation present from my parents in 1982, and it remains the oldest comic book I own.

The smiling faces of the kids reading the comics in the second photo from 1942 carry a melancholic weight because this picture was taken at the Manzanar Relocation Camp (terminology varies) in California in 1942, where thousands of Japanese Americans were held in the wake of the attack on Pearl Harbor. The ultra-American content of some of these books (and the racist depictions of our Japanese foes, as seen on the cover of the BLUE BEETLE comic) surely felt ironic to kids being held for no reason other than their heritage.

The spinner rack the kid is perusing in the first photo from 1954 is maybe the most notorious of this gallery, because it’s loaded with EC and EC-inspired horror comics that were the cornerstones of the attack on the medium by Frederic Wertham and Estes Kefauver. In a few years, all of these books would be canceled, replaced with safe, self-censored kid-friendly fare, to the ultimate detriment of the art form.

As the '50s progresses, you can see how the medium moved away from horror and superheroes and towards more family friendly fare such as westerns, funny animals, teen humor, and romance.

The penultimate photo is actually the cover of National Periodical Publications’ 1962 Annual Report. NPP was better known as (and later renamed) DC Comics, making the three non-DC comics visible at the bottom of the spinner rack on the left hand side a curiosity.

The final photo resonates with me on a personal level because by 1975, I was a full-fledged fanboy, and purchased many of these comics off of the spinner racks at stores like PenSupreme, Rea & Derick, and every newsstand and drugstore my parents dared to enter. This photo didn’t take that much detective work. I instantly recognized which issue of SPIDER-MAN that was nestled in the second row. Perusing the spinner rack… was a powerful act, a feeling I’ll never forget. I can’t even imagine what it was like to do so in the Golden Age.

I really wish I were able to locate more shots of newsstand and drugstore comic books from the Silver and Bronze Ages, but sadly, there don't seem to be too many out there. I'll keep digging (a second gallery is already in the works), but if anyone has or knows of any images, please let me know!

Thanks as always to The Grand Comics Database for its invaluable resource. 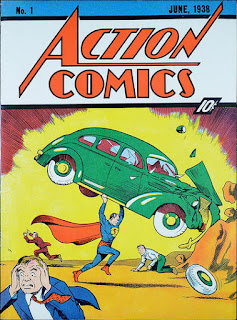 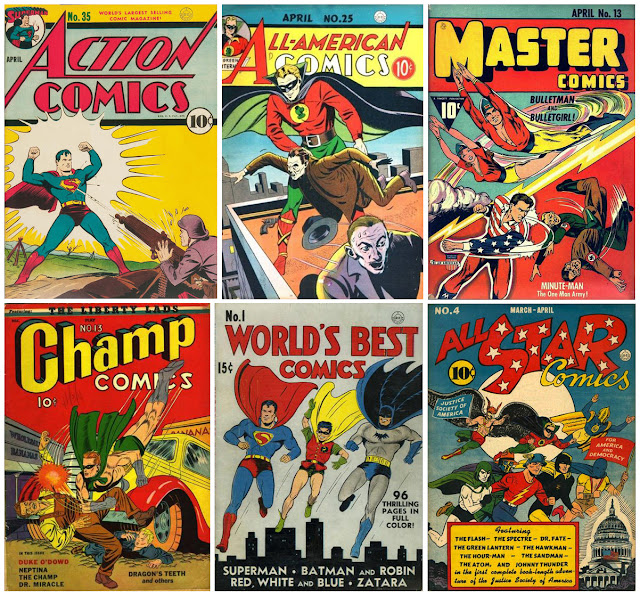 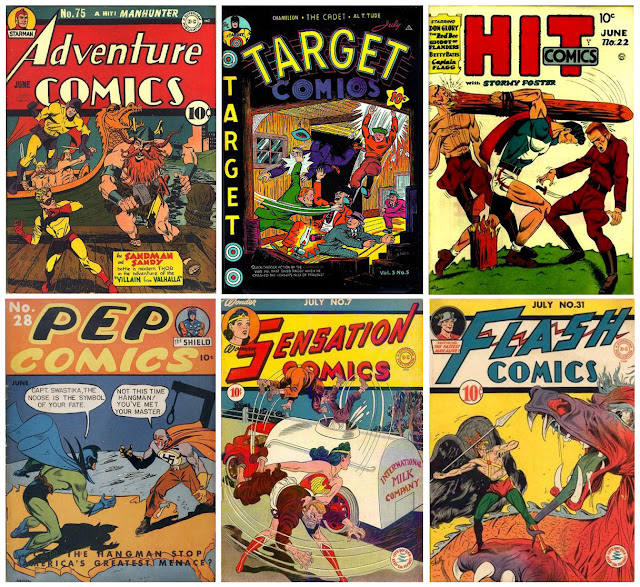 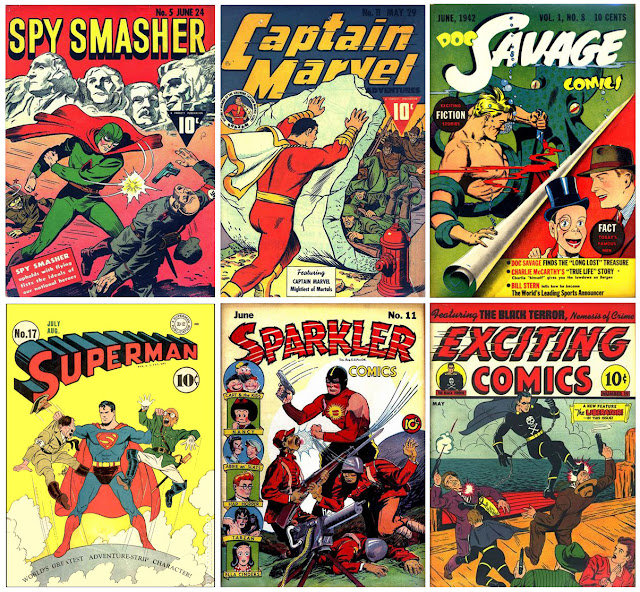 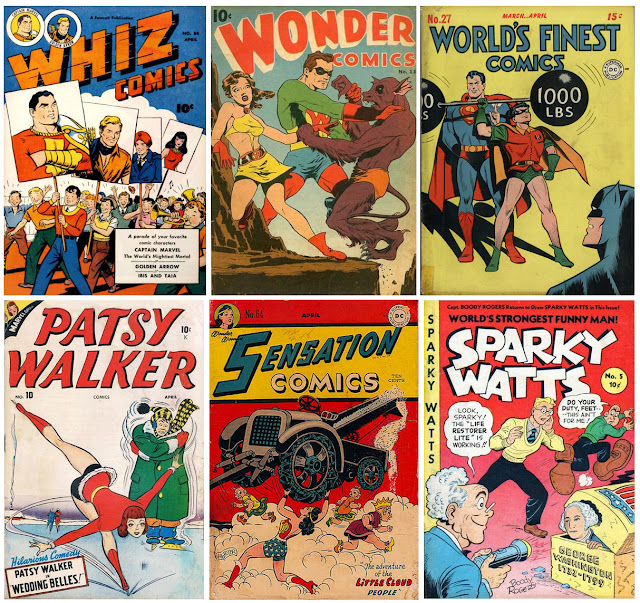 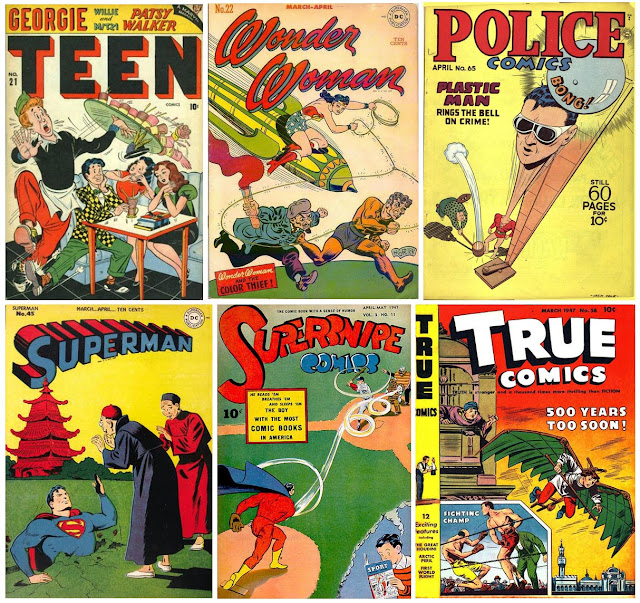 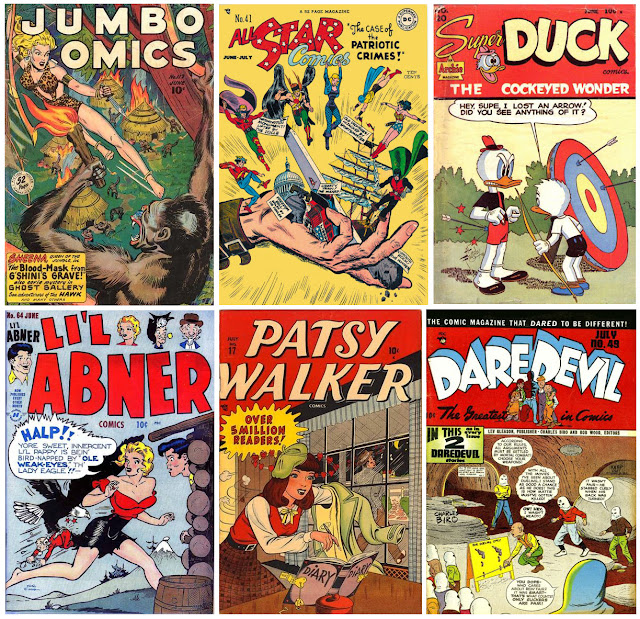 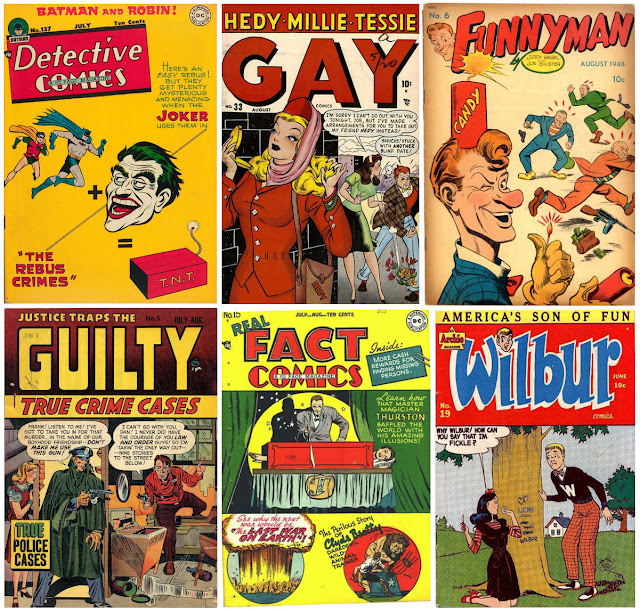 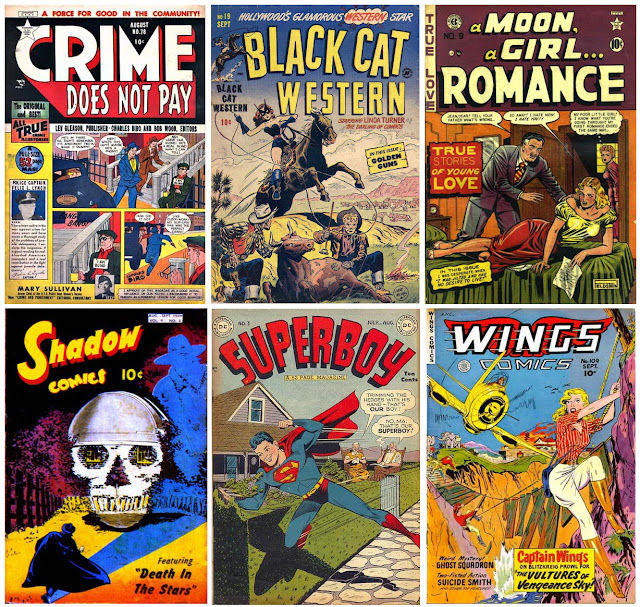 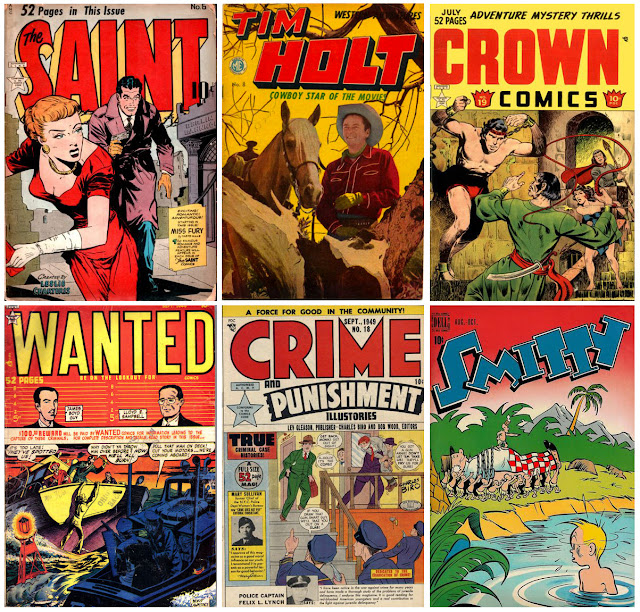 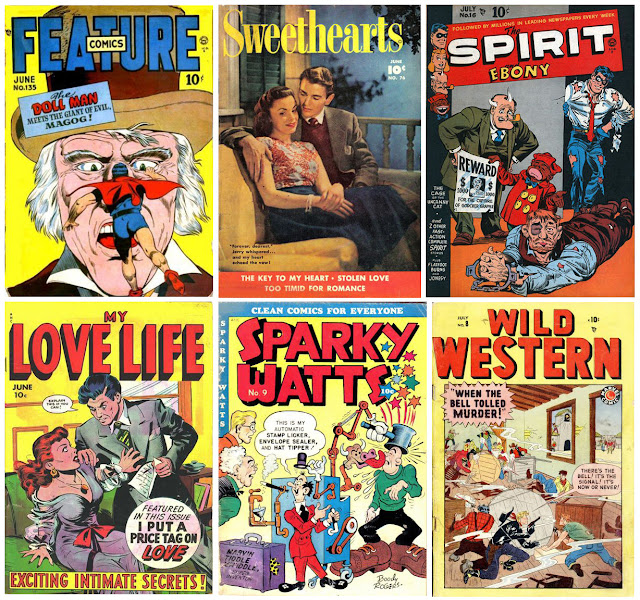 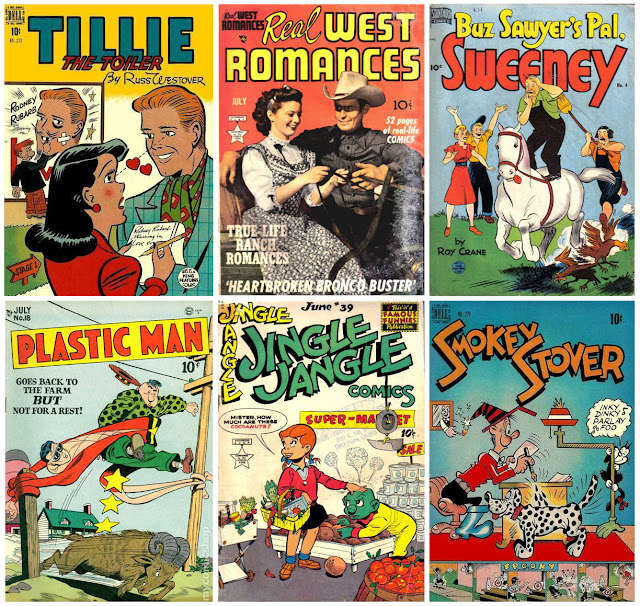 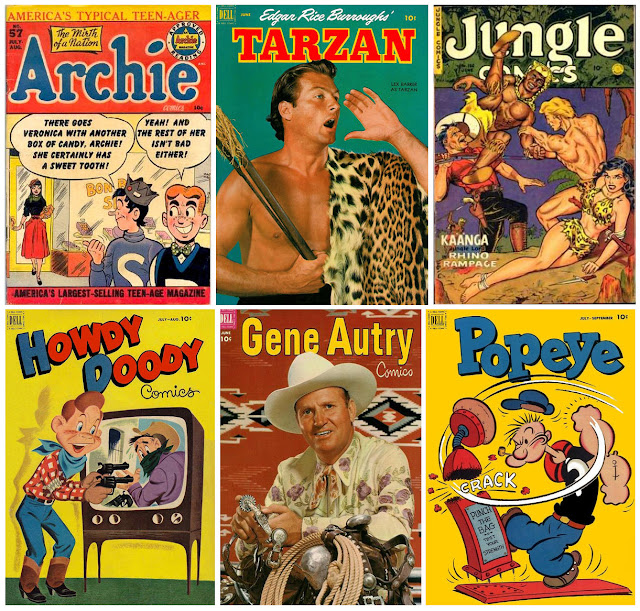 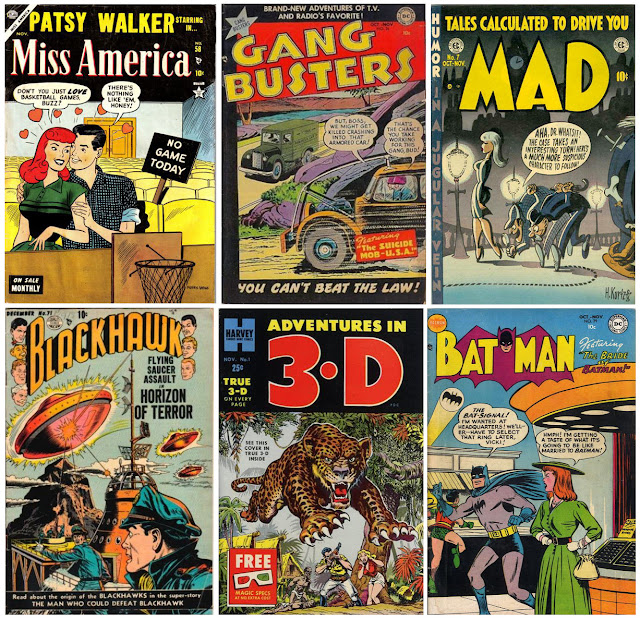 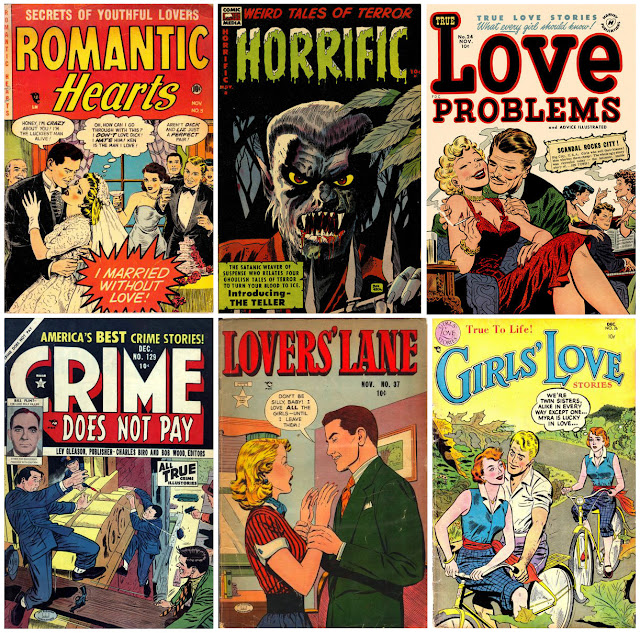 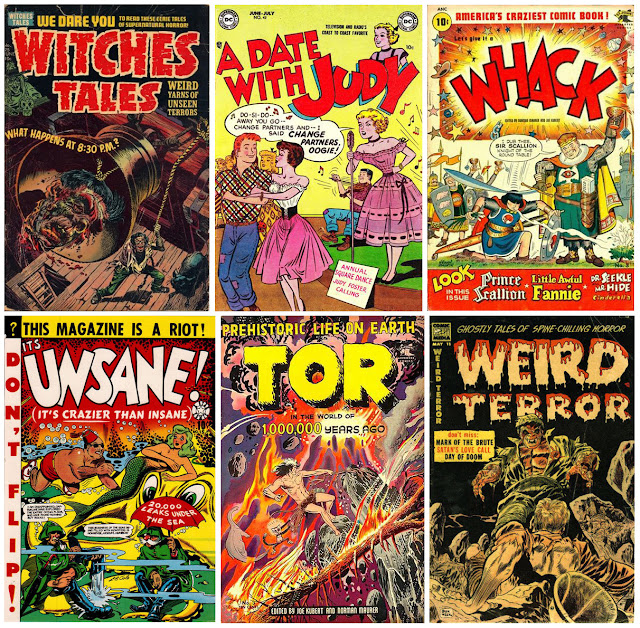 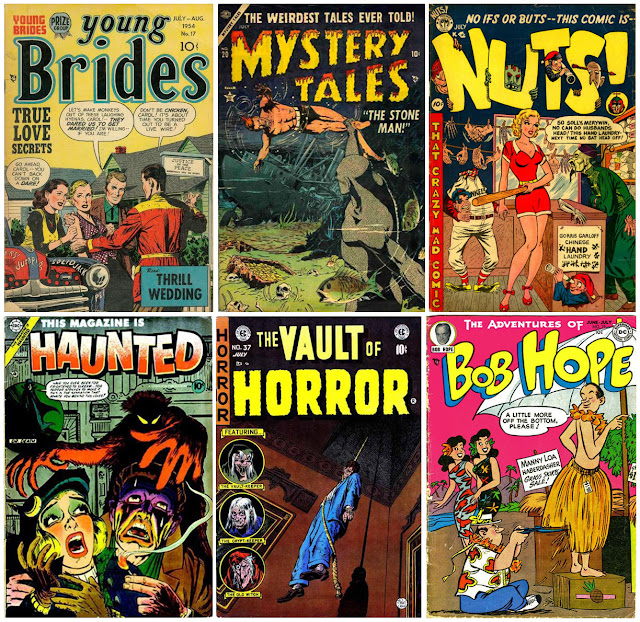 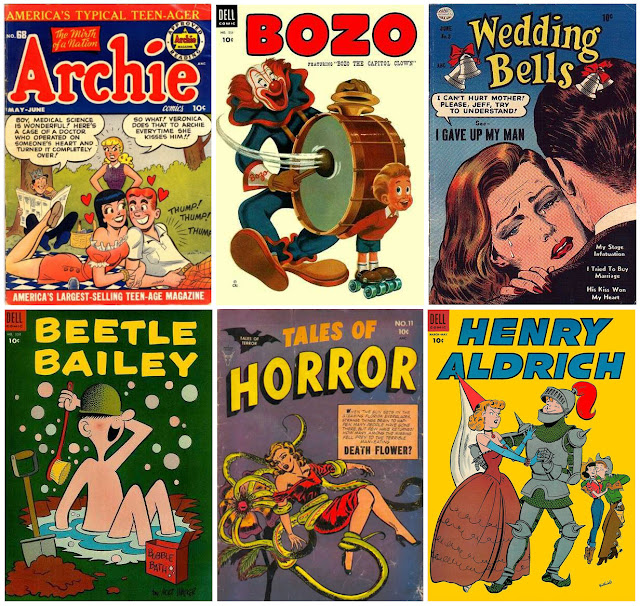 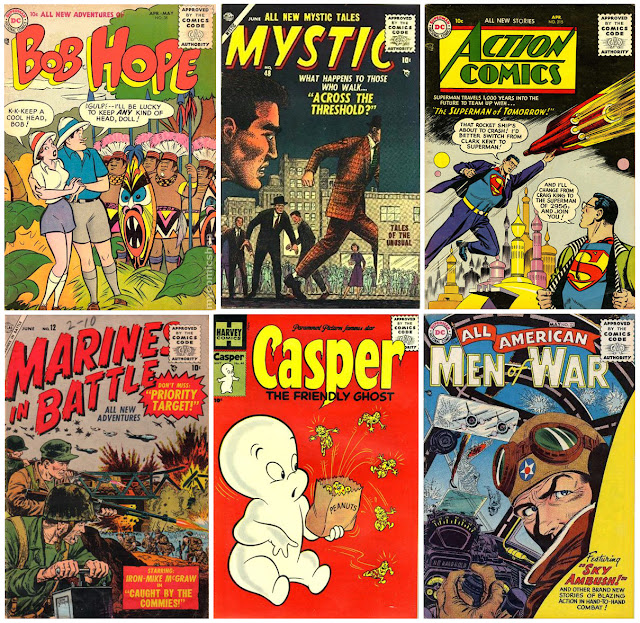 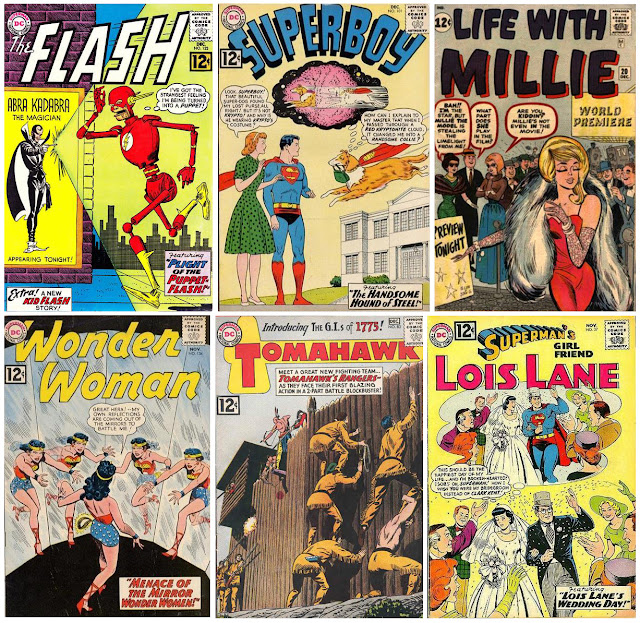 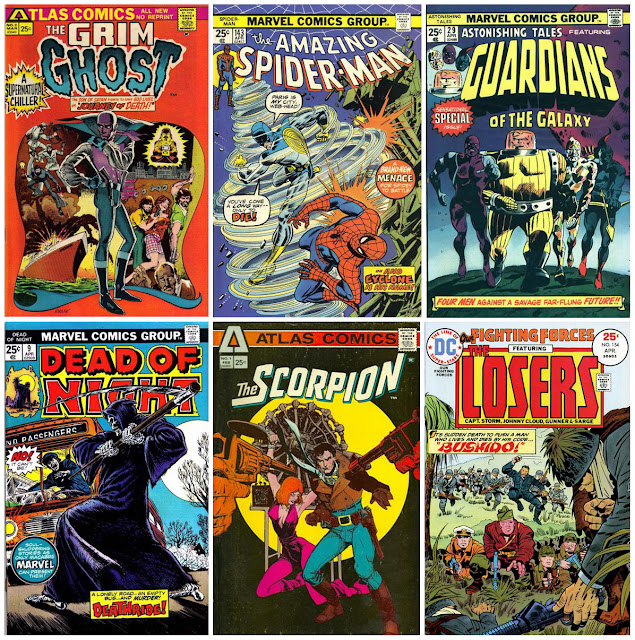