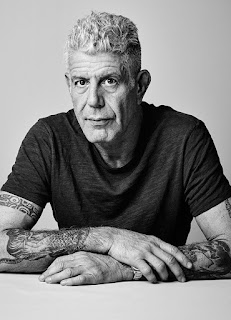 “Another tattoo is never gonna make me younger or tougher or more relevant. It won’t reconnect me, ten years from now, with some spiritual crossroads in my life. No. At this point, I think my body is like an old car. Another dent ain’t gonna make a whole lotta difference. At best, it’s a reminder that you’re still alive and lucky as hell.”
-Anthony Bourdain, Parts Unknown, S6EP6 (Borneo), CNN, November 2015

So, this Anthony Bourdain thing messed me up. Like, seriously and unexpectedly messed me up. I’d always liked the chef-turned-author-turned-television documentarian, I watched his old show, No Reservations regularly, I certainly related to his seasoned rock and roll demeanor, but I wasn’t exactly what you’d call an acolyte. I hadn’t checked out his CNN series, Parts Unknown, nor read any of his books. Anthony Bourdain just wasn’t someone I necessarily put in my immediate pantheon of pop culture inspiration.

Like so many of you, I’ve known some suicides in my time on this stupid planet. The first one was a friend of my mother’s who lived across the highway from our suburban cul-de-sac with her husband and two kids. One day, she turned on the car in the garage and just sat there until the carbon monoxide took the breath out of her forever. I was in Elementary School when it happened, and it was the first time I was aware of this phenomenon of ending your own life.

But Anthony Bourdain’s taking of his own life affected me in ways I couldn’t anticipate, and not just because I didn’t personally know the man. In the immediate aftermath of his death, I began bingeing on Bourdain, watching multiple episodes of Parts Unknown daily, finally reading Kitchen Confidential, feeling shittier about his abrupt absence with each consumption.

I was hardly alone in feeling a kinship with the man (it was a recurring thread in almost every tribute), but we definitely had a lot of things in common. We were both of the same generation (late Baby Boomer), aging punks, atheists, comics aficionados, veterans of the hospitality industry, jaded cynics known for being sometimes caustic, usually brutally honest, and occasionally judgmental.

But maybe more than anything, we both placed extreme importance on the more tangible pleasures of life rather than spiritual things. Bourdain referred to himself as a “sensualist,” someone who constantly sought the excitation of all of his senses. For Anthony, that mostly came from the culinary joys of food and drink (and, in his younger days, various hard drugs), but he also loved to experience the sights and sounds of everywhere he went. He made the most inhospitable environs seem warm and welcoming.

Even the best television shows about food cannot help but leave you wanting. Regardless of how tantalizing the dish looks onscreen, you can’t smell or taste it, and the beauty shots of the expertly prepared repast just become all the more frustrating when you try (and fail) to replicate the recipe yourself or order a disappointing approximation at some restaurant not staffed by the people you saw make it on the tee-vee.

What made the food on Bourdain’s shows so appealing was his interaction with it; The pleasure he took in authentic gastronomical culture, whether it was the ultimate in elegantly appointed fine dining or tubed mystery meat off of a beat up old street cart. He reveled in all of it, made us envious not so much of the meals themselves as much as his enjoyment of them.

Like many, I lived vicariously through Anthony Bourdain. I watched him go places and eat things that I never would. Because one thing that he and I did NOT have in common (sadly) is a sense of adventure. It’s just not in my DNA. Most episodes of Parts Unknown don’t elicit sighs of envy so much as cries of “Oh, HELL no!” As much as I enjoyed seeing Tony trudge through the streets of numerous underdeveloped, heat-drenched countries, scarfing down stewed testicles and live insects (or, just as unappetizing to me, classic French cooking... see image, right), I’m content to watch it from the comfort of my couch in my air conditioned apartment, eating a big old boring bowl of pasta.

So, if I claim to be so moved by his life and death, what am I to take from it if I’m not going to start traveling more and expand my culinary horizons? Anthony Bourdain’s death did inspire me to change my life in one not insignificant way. For the past handful of years, I’ve been particularly down on myself. I’ve been mired in a kind of unproductive stasis, wallowing in self-pity and lamenting everything that I’ve lost and/or never had. I’d been feeling like, just past the crossroads of a half-century of life, I was basically treading water. I created a social media persona for myself that went beyond humorous self-deprecation into bitter self-loathing.

Anthony Bourdain’s suicide shook me to my core. Here was someone who led a life that almost everybody coveted (you know, aside from the battles with heroin), or at least thought was as fulfilling as a life could be. And in the end, it still wasn’t enough. But rather than feel defeated by his ultimate surrender, I’m choosing to look at it as a kick in the ass I’ve so desperately needed. What I’m taking from Anthony Bourdain is to more fully live the life that I’ve created for myself. To stop kicking myself over what I haven’t done and embrace what I’ve become in middle age. Hence, this piece, the first new bit of writing I’ve done in over two years. 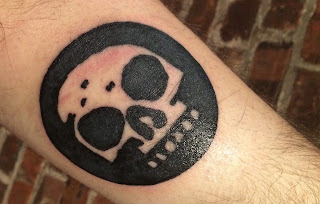 Also, I got a new tattoo. I’ve been talking about getting a second tattoo for years (I got the first way back in 2001), but it’s always been far down the to-do list. In tribute to Tony, I stopped making excuses and just did it. Also, temporarily forgoing the image I’d had in mind for years, I somewhat spontaneously chose to get a Mike Mignola-drawn skull on my left forearm (this was before I knew Bourdain likewise had a skull tat on his chest). Why a skull? Partly because it’s a reminder that ultimately, this is all we are, so live for today, but also partly for the same reason Bourdain got so many of his tats well into his middle age… I just liked it.

But it’s more than just this and tats. I’ve thought about Anthony Bourdain every single day since he died. I’ve tried to spend more time creating and less time being distracted by the things that give me joy (my collections, hanging with friends, drinking good libations, and consuming beloved chunks of popular culture). But, just as importantly, I’ve also stopped feeling bad about the fact that I CAN fill my days with those pursuits that are foreign or remnants of the past for most people my age. I am where I am in life mostly by choice. My choice. So be it.

Because here’s the main thing that I have… that I had… in common with Anthony Bourdain. I get it. I get why / how he left. Most people who watched No Reservations or Parts Unknown probably just came away thinking, “Man, this guy really likes to eat.” But it was so much more than that. The words he used, the way in which he was able to so beautifully and palpably describe the life he led…

You don’t wax that poetically about the simple joys of life… of food and drink and a rainstorm and all the sensual pleasures that Bourdain so eloquently adored… without feeling the flip side. The extremely painful, debilitating flip side.

If you watch any episode of either of Bourdain’s show, it’s not uncommon to hear Tony opine that “life is good,” or “It’s good to be alive,” and his suicide does not undercut those sentiments. If anything, it’s a stark reminder to live your life to its fullest. Like Anthony Bourdain did.

Thanks for the reminder, Tony. And the tattoo.
No comments:


A few years back, I posted three galleries of old photos of newsstands (you know, those things that sell lottery tickets and bagged snacks? They used to sell periodicals!) with montages of some of the comic books on display (click on the hey kids comics label at the bottom of this post to see them all). It was so much fun to put together, doing the detective work, assembling the images, that I wanted to keep going (honestly, one of these days I'm going to go back and add more comics to those original posts, some of the montages were a bit sparse). Sadly, I seem to have mostly tapped the well of usable newsstand pictures (insert sad face emoticon here), but here's a related sequel.

What follows is a gallery of 54 photos of people (mostly kids) reading comic books from the 1930s thru the 1980s with some of the covers of the books being devoured. The dates captioning the pictures are based on the release of the comic books, so some might be a year or few off, but they are most certainly within close range. The soldier in 1942 is reading a comic featuring the racist imagery prevalent in WWII era books that served as anti-Axis propaganda at home and abroad. Note the horrified looks of those poor, traumatized youngsters being turned into juvenile delinquents by the horror and crime comics of the mid-50s (that's sarcasm, folks). Also, that Superman fella sure seems popular.

Two of these are cheating: The 1970 photo shows kids shopping, not reading (although that was sure to come) and the final shot depicts a kid seemingly drawing his own comics, although the mountain of Bronze Age Comics on his bed certainly indicates a regular partaking of that divine diversion.

Coming later this year: A sequel to this piece of comics being perused by celebrities (both in real life and in film and television).