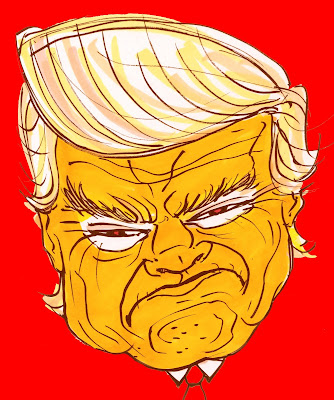 I realize that the last thing the world needs is yet another piece by a terrified, angry liberal screaming into the void / preaching to the choir about Donald Trump, but I have to make a public mea culpa. See, I thought… and often loudly opined… that he’d be gone by now.


Since the day Donald Trump was elected the President of the United States (you all remember that, right? Shortly after Halloween, couple’a years back?), my prediction was that he wouldn’t fulfill even half of his term. My window for his departure (whether through resignation or impeachment) was 15-18 months.

Well, it’s now August 2018, and as the perpetual pit in my stomach confirms, Boss Tweet is still firmly and flabbily ensconced in the Oval Office (or, more likely, one of his golf clubs).

In the beginning, my theory was that enough impeachable dirt would be rather quickly uncovered that would make it difficult for him to stay in office, and that he’d resign, but spin it as “finishing the job early,” so he could move on to creating his new media outlet, or just go back to slapping his name on crap, or whatever. Because while I never bought the theory that he didn’t want to win (he ALWAYS wants to win, even if his primary motivation for running was spite), it’s a given that he never wanted to do the actual hard work. Doing work is not his thing, man.

Well, certainly, dirt has been uncovered. And his behavior in office continues to bring disgrace to the entire country on practically a daily basis. He has said and done things that would’ve been political suicide for anyone else in any of the branches of government.

But there are three things on which I didn’t count. One, that none of this would matter to his intractable base, the true wall that he has built around the country, one made out of flesh and ignorance. Two, that Congress would turn out to be cowardly toadies who make excuses for Trump rather than hold him to his oath of office. And three, that the POSPOTUS himself would become hopelessly addicted to the power and sycophantic glory his position engenders.

And while I still think there’s a wee bit of a chance he doesn’t make it to the end of his term, if he does evade being ousted from the post for which he is so brutally unqualified… I think it’s more likely than not that we’re in for another four years (or more, if he has his way). But even if Donald Trump ceased to be President tomorrow, enough damage has been done that I don't think it'll be fixed in my lifetime, if ever. Maybe we are now living in the Idiocracy that Mike Judge predicted (only we got there 490 years earlier than the movie's timeframe. Isn't that cute?).

I was not one of those optimists who felt that Trump didn’t stand a chance in 2016. I’m cynical enough that I believed the country's  heapin' helpin' of gullibility, hate, and misogyny left a decent chance that he could beat Hillary Clinton (who, without getting into pointless rehashing, was in my opinion, the worst possible candidate to go up against him).

So I was not shocked on November 9, 2016, when I awoke to the confirmation that the Captain Bonespurs had beaten his cocky and  entitled opponent. Horrified, numb, depressed as fuck, sure. But not shocked.

As I rode the train to work that morning, I got a taste of the divisive environment that was about to ripen in America. Sitting across and down the car from me was a young African-American man reading the newspaper, and when I locked eyes with him, he scowled, shook his head in disgust, and went back to reading. I thought maybe I was being paranoid, but as I stood and crossed to the door as the train pulled into the station, I glanced over at him, and he repeated his repulsed reaction. I wanted to try to explain that I wasn’t the enemy, that I was as mortified and disgusted as he, but I decided to let him have his resentment. He deserved it.

As a quick side note, while I held my nose and pulled the lever for Clinton, I can’t side with those who blame voters who chose Gary Johnson or Jill Stein or any other third party candidate for the results of the election. Nobody should be vilified for voting their conscience, for refusing to choose “the lesser of two evils,” regardless of the ramifications. If fingers must be pointed (an ironically pointless exercise), aim them at those who actually voted for Trump, or the 40-some percent of the eligible voters who abstained altogether, whether out of apathy, laziness, or whatever other lame excuse they mustered.

18 months in, my own grief has turned to anger and dismay. Not to put too fine a black point on it, but I truly think we’re doomed. What we’ve witnessed as this presidency has edged closer to dystopia is the triumph of narcissism, anti-intellectualism, and willful, arrogant ignorance. His followers not only don’t want to hear any of your fancy “facts,” they are proud of their aversion to (gag) “FAKE NEWS,” that Pavlovian, unbreakable, catch-all rejoinder that carries about as much intellectual heft as a surly teen’s “Whatever.” You can (and we do) have concise, carefully corroborated, and non-partisan laundry lists of malfeasance and lies perpetrated by their Great Orange Leader, and they reject it without even taking a nanosecond to consider ANY of it might be true. None of these people have ever typed Snopes into their browsers.

Even when, at one of his seemingly ceaseless rallies (which are not held for the benefit of the attendees, but rather for the fluffing of his own perpetually needy ego), Trump spouts some nonsense that has NOTHING to do with the audience—like, say, implying that they have better houses and boats than the so-called elites—they scream and froth and lap it up like melted Velveeta… because WHAT he says matters less than HOW he says it. His anger and hatred and dismissiveness reflect their own and they feel validated, even empowered. “I can be a dick to people because the leader of the free world is a dick!” This is why old white men think it’s okay to accost a young brown woman for daring to wear a Puerto Rico tee-shirt in America. It’s why hate groups have not merely proliferated under this administration (up 20% since 2014), they’ve felt emboldened to come out in the open and proudly fly their flags.

So, if facts have completely ceased to matter (after all, truth is not truth), how can the left appeal to the 2016 fence-straddlers who ultimately jumped onto Trump’s side, and then drank deep from the well? Aye, there’s the rub: I don’t think we can. Setting aside the ballooning deficit, unless the economy stops improving (a trend that began before Trump took office, but for which he naturally takes full credit), nothing’s going to make the Trumpsters turn against their Great and Powerful leader. And maybe not even that. Aside from some who are beginning to see the downsides of Trump’s tariffs, most of his followers don’t seem to care how much he’s worked against their own self-interest (particularly if they have kids who are going to have to live with the environment —both literal and cultural—he’s curating). At this point, their love for him is a matter of personal pride, even if he could not give one flying fuck about any single one of them.

Because this is the thing that I truly don’t get: How anyone, regardless of politics or social status or any sociological dividing line you wanna draw, cannot see that the ONLY thing he cares about is his own ego stroking. That’s it. The beginning, middle, and end. Much as I loathed some of the Presidents that preceded this one, I still believe that every one of them felt that they were doing what was best for the country (Okay, maybe not Nixon, but I was too young to have had issues with him at the time). Not this guy. This guy doesn’t give a shit about you. Unless you happen to be Ivanka reading this thing right now, in which case, THE FUCK IS WRONG WITH YOU, YOUR FATHER WANTS TO BANG YOU, GET THE HELL AWAY FROM HIM!

So. Sigh. Here we are. We’re stuck with him. Regardless of the ultimate outcome of the Mueller investigation, no matter what we hear on any more audiotapes, no matter what he tweets or says or does, he has succeeded in relentlessly bludgeoning the republic into a state of numbness. Nothing matters anymore. The United States of America is Trumpland now. Paint the White House gold and slap his name on the outside. He’s here to stay.

Ghad, I hate being wrong.

__________________________________________
POSTSCRIPT, August 23, 2018: I posted this yesterday morning, having no idea (of course) that later that afternoon, two of the biggest bombshells in the ongoing investigations into Trump would be dropped: Paul Manafort's guilty verdicts on 8 of the charges against him, and Michael Cohen's guilty plea for campaign finance violations, incriminating "a candidate for federal office." While the news media went into overdrive pontificating what these two events meant for Trump, I remain convinced that the answer is, ultimately, nothing.

Time for another gallery of old photos of comic books in context! This time, I've dug up 39 pictures of celebrities (who, as I think David Letterman once pointed out, are our betters) reading comic books, in real life as well as in character in film and on television. Some of these are studio promotional photos, some are candids, some are screencaps. MAD Magazine in particular regularly featured pictures of its satirical targets reading the issue in which they were lampooned (a few of which are included here). At the end of the gallery are two bonus photos with no accompanying detail: Another shot of Elvis reading Betty & Veronica and Welsh singer Shirley Bassey (singer of not one, but TWO great James Bond themes!! Also, "Moonraker." Not great.) perusing a UK edition of the comic book, True-to-Life Romances, for which I could NOT find a cover online. Anyone? Little help?

Also, please note the absence of any still from THE BIG BANG THEORY. Ghad, I loathe that thing.