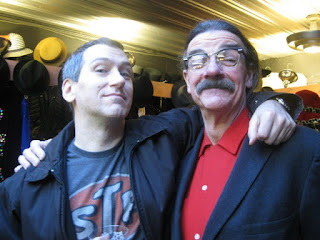 What follows is the tribute I gave last Saturday at the celebration of the life of my dear friend and old boss, Stephen Alton Murray, who died of a brain aneurysm on Sunday, March 3, 2019. There is some crossover with a piece I wrote in 2011 when he was seriously burned in a fire that destroyed Steve's legendary vintage clothing and accessories store, Zap & Co. in Lancaster, PA.

The "Stevent" was held at Lancaster's Fulton Opera House, and was packed with friends, family, customers, and fans of this icon of the city, and a key figure in the renaissance of downtown arts and commerce. I was truly honored to be asked to be a speaker and decided to focus on an aspect of Steve Murray that most people didn't get to experience: Having him as a boss.

I’m gonna tell a few tales about what it was like to work for Steve Murray. Forgive me if you’ve heard them before. I tend to re-tell stories. It’s something I learned from both my late father and Steve.

It was thirty one ears ago when I went from working part time at BBC Records for Steve and Paul to managing the joint. I was a whopping 23 years old (don't do the math!!).

When I took the job, I had a meeting with Steve about what I wanted to do with BBC. While the lure of the shop was imports, and its inherently cool vibe, it was basically a regular independent record store. I wanted to turn it into an ALL-ALTERNATIVE (although that term didn’t exist yet, I can’t remember what the hell we called it… post-punk / whatever) store. Which meant that, aside from used product, I wanted us to stop selling things like Steely Dan or Bruce Springsteen or… The Beatles.   And Steve, the guy who once spent every dime he had to go to England to try to get a job emptying wastebaskets at Apple Records… said okay.

As with everything Steve championed, he liked the idea of making the store as cool as possible, regardless of the fact that it would make our potential clientele… smaller.

And then at the end of the meeting, we stood up, and Steve —who was just like a few inches taller than I am, but always seemed to tower over me— put his hand on my shoulder, and said, “There’s one last thing. And I’m just going to say this this one time… you’re the manager… but it’s my store.”

And in the next seven and a half years, he never said it again. Steve gave me practically anarchic free reign to run BBC Records as I saw fit, even when it was something as self-serving and even more commercially bone-headed as expanding our specialty to include classic Jazz and Pop Vocals… traditionally not a hot genre in music retail.

He rarely grabbed any of the promo CDs that came into the store on a daily basis, and I always got first pick of that cornucopia of goodies.

In fact, there was, to my recollection, only one time he ever pulled the owner card on me. We had purchased a large 1950s-60s record collection from the son of an old man who had passed, and I had pulled a small stack for myself. Steve came into the store and saw the album that was at the front of the stack, and said, “Sorry, I’m keeping that one.” 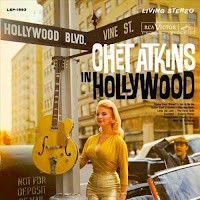 The record was CHET ATKINS IN HOLLYWOOD. Was Steve that big of a Chet Atkins fan? When you think of Steve, you don’t immediately think of The Nashville Sound. Well, I’m Not sure, but I think the reason he wanted that record had more to do with the album cover, which depicted a very buxom and beautiful blonde,  posing on the corner of Hollywood and Vine.

I have hundreds of memories of my time at BBC, back in the heyday of the trinity, when the 300 Block of North Queen street was anchored (in my subjective opinion) by Zap, BBC, and DMZ. Don’t worry, I’m not gonna share them all. I won’t tell you about the time we ran out of gas driving to see Jane’s Addiction at the 9:30 Club in DC. Or about Steve closing up all of his stores so we could all go protest Dan Quayle’s appearance in the square. Or the Friday afternoon six packs of Rolling Rock that he’d buy for everybody. Or racing to meet the UPS truck before it got to the 300 block so we could have new releases stocked as soon as we opened. Or the time he just strolled backstage at an R.E.M. show and nobody stopped him because of COURSE he belonged there! 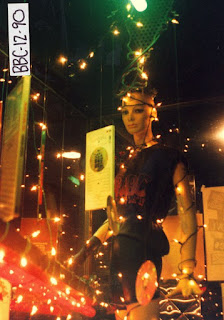 But I will share one thing. Lots of people over the past week have mentioned Christmas Eve at Steve’s stores every Christmas Eve was a day-long party. Steve would bring bottles of chilled Freixenet champagne to each store for us to share with anyone who came through the doors. At BBC, the twinkling Sputnik in the window, Vince Guaraldi coming from the speakers, last minute shoppers buying T-shirts and import CDs, friends coming by just to hang out (which happened a lot… we didn’t just have couches in the store to take up floor space). Steve would bounce from shop to shop, wishing everyone a Merry Christmas, and we’d stay open until we just felt like closing. Then we’d all convene at one of the stores for our staff party, where gifts would be exchanged and more hooch would flow until we all somehow staggered our ways to our respective family gatherings.

And even after I moved away from Lancaster, I would still make stopping by Zap to see Steve and have some of that champagne a part of my Christmas Eve tradition. And every single time, I was greeted with a giant hug from my old boss. It was home. It was magical.

Working for… or, as Steve would put it, WITH Steve Murray was pretty much like what you’d imagine… There were some struggles, particularly back when Lancaster was far more staid than it is today (thanks in no small part to the efforts of Steve). But we felt like an oasis. We knew we were a part of this amazing haven for Lancaster’s artists and oddballs. And we had a hell of a lot of fun. Me, Rex, Doug, Yvette, Margi, Casey, Cheri, Tim, Jim, Kathy, Trish, Alicia, Rob, Troy, Beth, Kenny, Steve, Peter, Ray, Kini, Chris, Kris, Jon, and everyone else who ever got a paycheck from Steven Alton Murray were so goddamn lucky to feel like we were a part of the coolest gang in town.

It's common when loved ones leave us suddenly to wish we'd had a chance to let them know how we felt. If there's a silver lining to that damn fire, it's that we... all of us... got the chance to let Stephen Murray know EXACTLY just how much he meant to us, and to this entire community.