In 1987, after being acquitted in a high profile racketeering trial, New York mob boss John Gotti earned the media nickname, “The Teflon Don” due to the inability of any of his charges to stick. Gotti was eventually sent to jail in 1992, and died a decade later of cancer, but even if he had avoided those fates, he’d still have to abdicate the nickname to the true “Teflon Don,” the melon-tinged, racist, wannabe autocrat who currently holds the position of President of the United States, one Donald J. Trump.

When the failed businessman (if we’re being honest) turned reality TV star was elected President in 2016 despite decades of recorded conduct that would’ve rendered any other candidate ineligible, there was a contingency that opined once he took office, he’d straighten up, tone down the coarseness and the divisive rhetoric, and become more “presidential.”

Only that didn’t happen.

If anything, as Trump’s delicate, yet oversized ego began to get even more inflated by the power and the glory of his new office, he doubled down on the kind of behavior that is—shall we say—unbecoming of a world leader. He continued to call opponents “losers” and other schoolyard pejoratives, he used his position to further the financial interests of himself and his cronies, he embraced despots while alienating longtime allies on the world stage, he did everything in his power to try to derail a legitimate investigation into collusion with Russia… oh, hell, you guys know the list. It’s unending.

And with each new twist of the knife into the heart of the Republic (and for which it stands), a chorus of hopefuls would think, “This is it! This’ll finally turn Uncle Joe and Aunt Dotty against him! This is the thing that’s going to take him down!”   But none of them did. Not taking Putin’s side over ours (“I don’t see why it would be!”), not the Mueller report (“Completely exonerated”), not another round of accusations of sexual misconduct (“She wouldn’t be my first choice, believe me”), not the constant tweeting of racist dog whistles (“Go back to your countries!”), none of it has made a dent in his base or his support in the Republican party. NONE. OF. IT. STICKS.

How can this be? Why is this unrepentant asshole so untouchable? I think the answer is simply… because he is an unrepentant asshole. If someone is totally unpossessing of shame, humility, empathy, and self-awareness, it’s kinda hard to cut through that armor with things like empirical evidence and civility. It makes him invulnerable to criticism. And so every assholish thing that this assholey asshole does and gets away with only solidifies his support amongst Asshole America.

We need look no further than his rallies. Those fucking rallies (over FIFTY since taking office!). Arenas and auditoriums and expo centers full (or partially full, anyway) of mewling sycophants who gobble up every mouth turd that falls out of his puckered face hole (that probably smells like a mix of rotting meat and Life Savers): Lies and self-aggrandizement and race baiting and lies and media bashing and let’s not forget the lies. Speaking off the cuff, he rambles and dishes out his greatest hits and says absolutely nothing of substance, but to many of his base, (and please forgive my repeating myself) WHAT he says isn’t as important as HOW he says it. That sniffling, gravelly tenor of his, punctuated with barks and growls and the occasional “Am I right?” has the same Pavlovian effect on his base as chirping, “Who’s a good dog? You are! Yes you are! You’re a good dog!” to an excited Jack Russell Terrier who doesn’t understand what you’re saying, but really wants to go outside and chase his own tail for an hour.

If you need any evidence that the tone is key, look no further than the rally in June of 2018 at which he declared, “We got more money, we got more brains, we got better houses and apartments, we got nicer boats, we're smarter than they are and they say they're the elite. You're the elite, we're the elite!”

Putting aside his usual poor grammar, let’s look at the content. He’s presuming that everyone at the rally is (a) super wealthy, (b) possessed of a MENSA level intellect, (c) living in the finest appointed homes, and (d) spending their weekends on the water in their yachts or some such conveyance.

But he made this speech at a rally in North Dakota. A landlocked state. And yet still, they whooped with wild enthusiasm (if that’s redundant, I apologize, I’m a little worked up). Did anybody in the crowd turn and look at the person next to them and say, “I don’t have a boat. Do you have a boat? Also, I’m living paycheck to paycheck in my parents’ basement, what the fuck is he talking about?”

It’s doubtful (and not just because I’m sure there were some people there who WERE well off and maybe even owned a boat, that’s not the point). For many people in Trump’s crowds, they FEEL his anger, they can taste the bile in his throat as if it were their own. Whether it’s borne of fiscal anxieties, racism, sexism, homophobia, xenophobia, whatever happens to be their own particular peccadillo, it doesn’t matter if he speaks to it directly or not. He’s mad. And so are they.   Asshole America just loves being validated by the person holding a job that was once considered a bastion of dignity and restraint. Unlike other Presidents who strove to inspire and unite, this one is content to JUST BE PISSED AND DIVIDE. Rather than those snooty college boys telling you to “ask not what your country can do for you” or some similar kinda highfalutin’, unselfish bullshit, they finally got a leader who just bitches about brown people and those damn furr’ners and his own personal enemies and who (again, no doubt disingenuously) brags about the size of his mushroom shaped joint.   Trump revels in his anger. It defines him. That’s his message to Asshole America: “Go ahead and be an asshole!” They’ve never been so fully and completely sanctioned by someone whose job it is to lead (you know, aside from Grand Wizards). If the most powerful person on this doomed planet can be such a colossal dick and get away with it, then why can’t they? Why CAN’T they be openly racist instead of just behind closed doors? Why CAN’T they be rude and demanding at a restaurant? Why NOT park in a handicapped spot if they want? Hey, let’s buy some more guns! Where’s the nearest Walmart? Anyone who thinks it’s a coincidence that hate crimes have increased in the past two and a half years is either kidding themselves or holding office as a Republican. Or both.

I’ve watched pundit after pundit after pundit try to parse this seemingly inconceivable state of affairs, wringing hands over uneaten plates of breakfast pastries, begging historians for hopeful precedent to end this national nightmare, asking Democratic POTUS hopefuls how they can defeat Trump next November, all digging way deeper than they need to.

Wrapping up this series with the (just shy of) two years that I did the schedules for Lancaster's Chameleon Club. My life went through a lot of changes in these two years, culminating in a move to New York City (via Hoboken, NJ, just across the river) in the spring of 1996. I kept doing the schedules (and MAILING them to Rich Ruoff!) for a handful of months, but after I got a job at Warner Bros. Records in July, I realized it was time to sever this tether to my hometown. As a tip of the hat to my early years working for Chameleon, I hand illustrated the artwork for one of the final schedules. 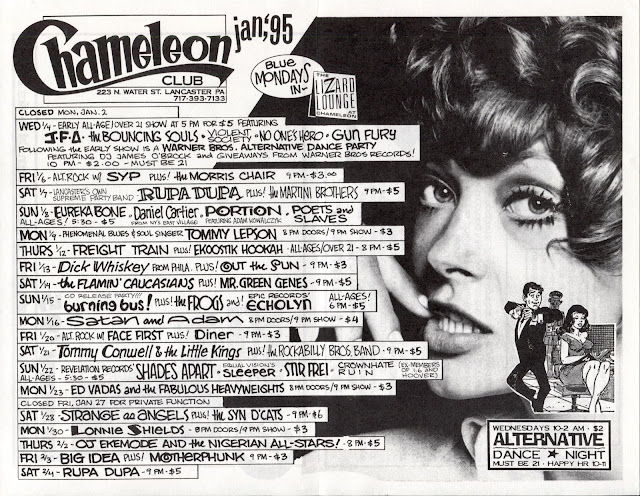 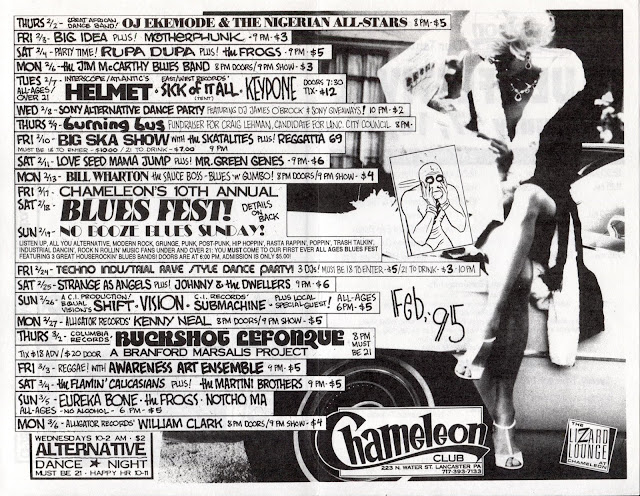 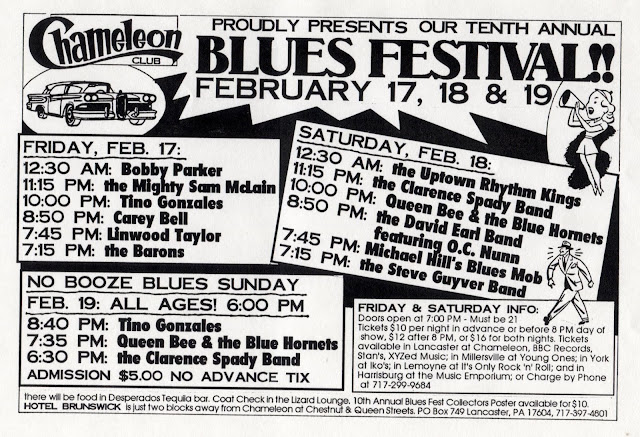 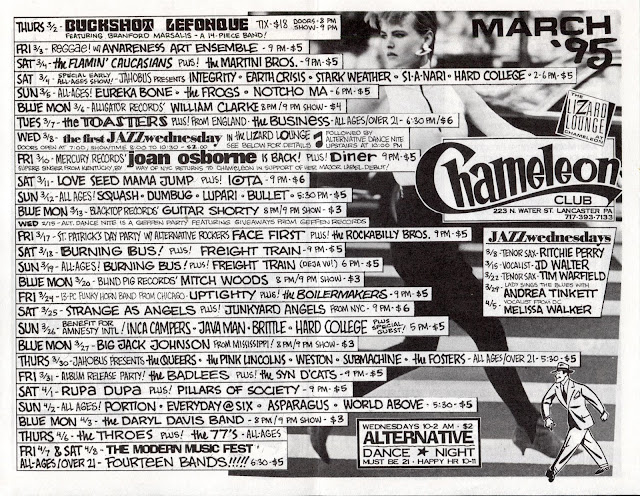 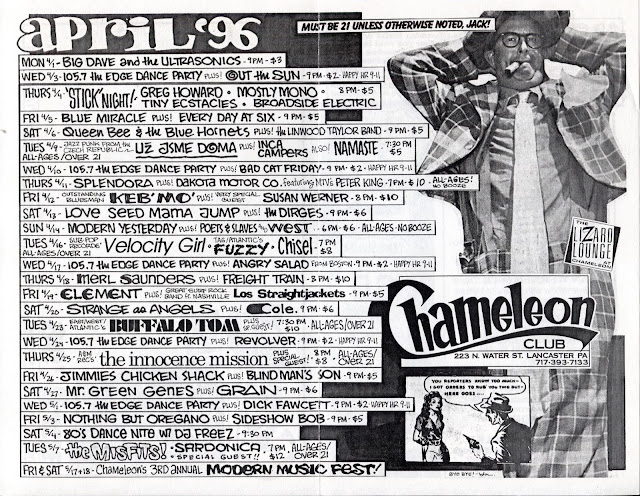 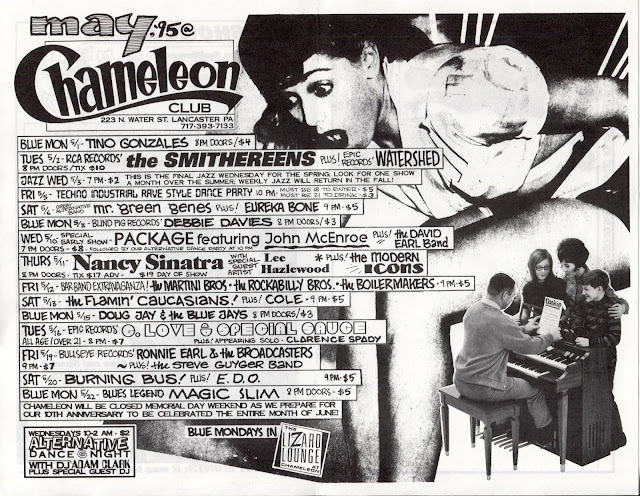 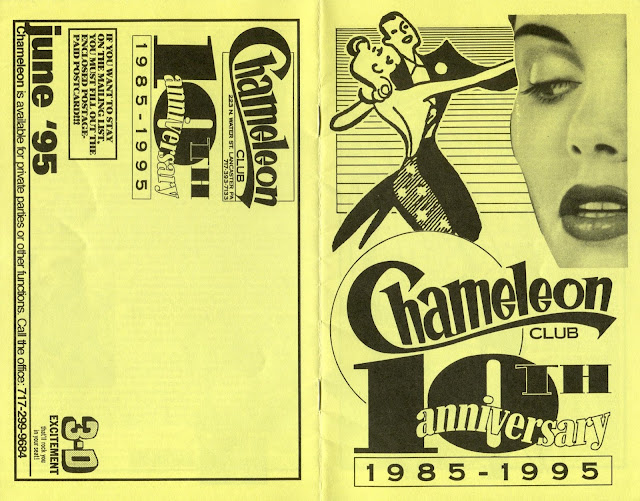 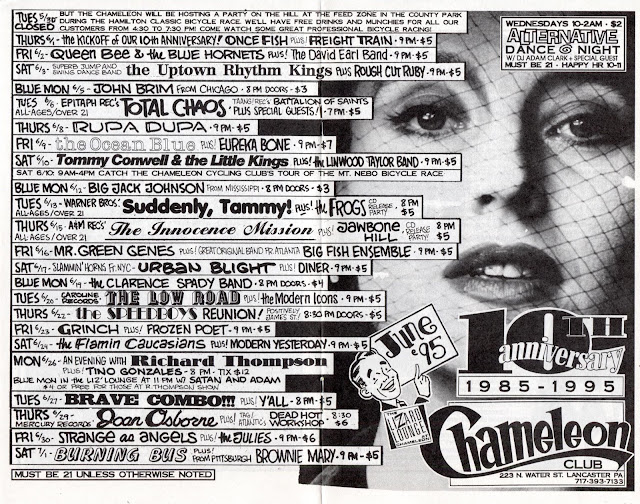 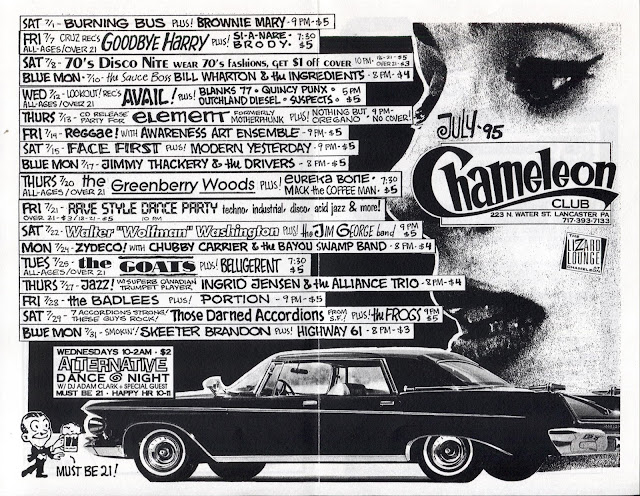 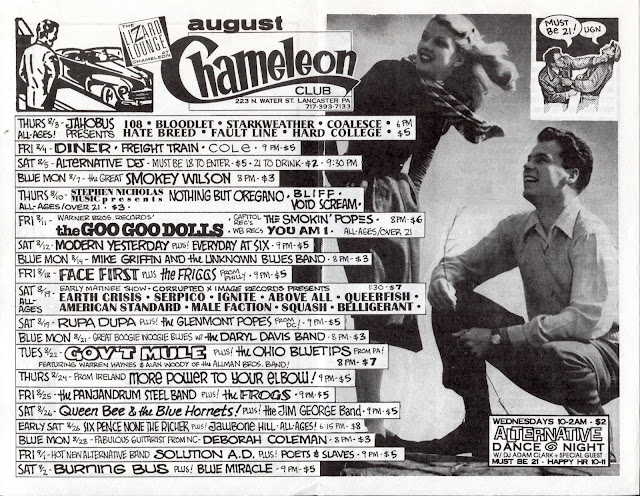 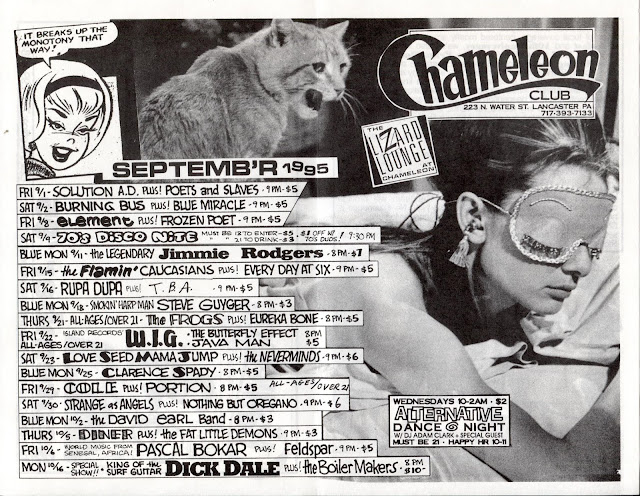 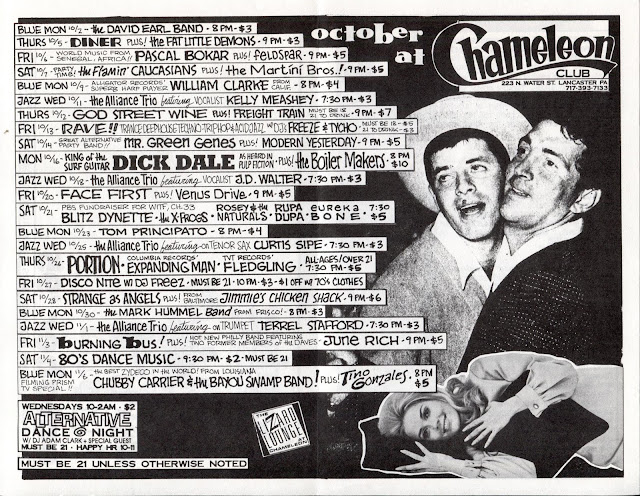 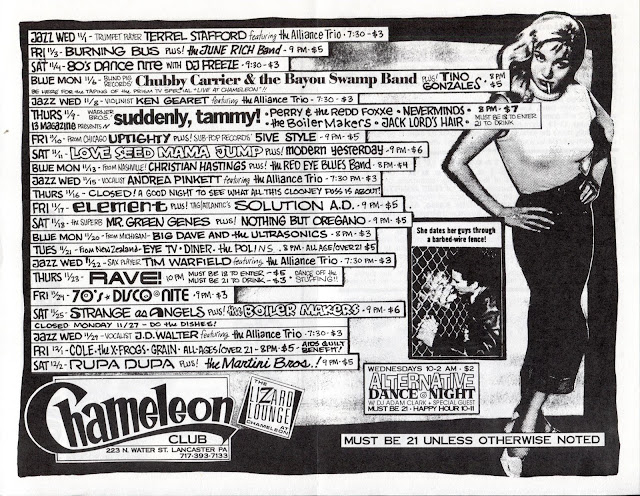 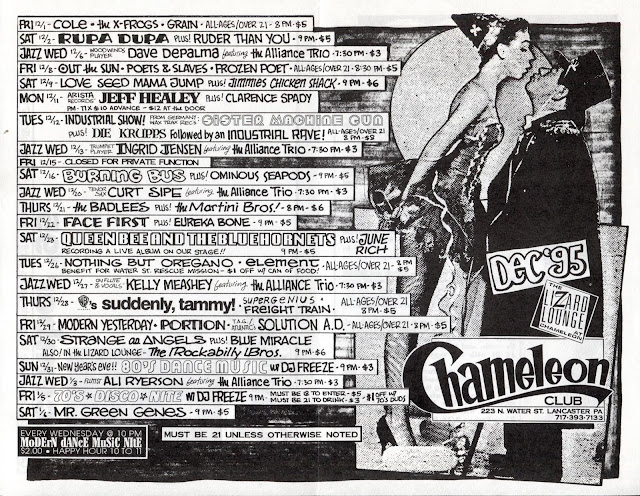 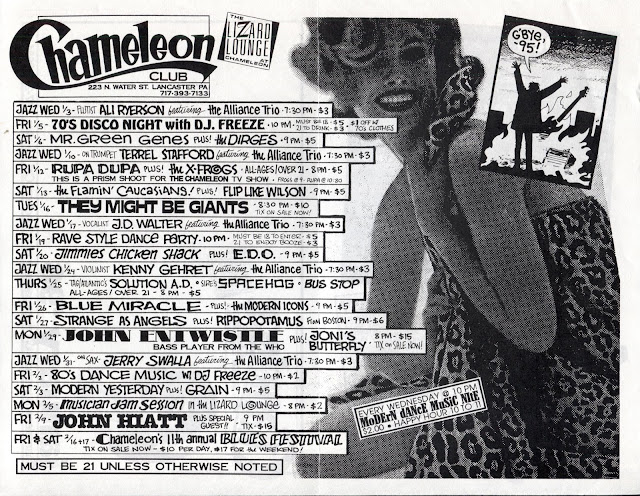 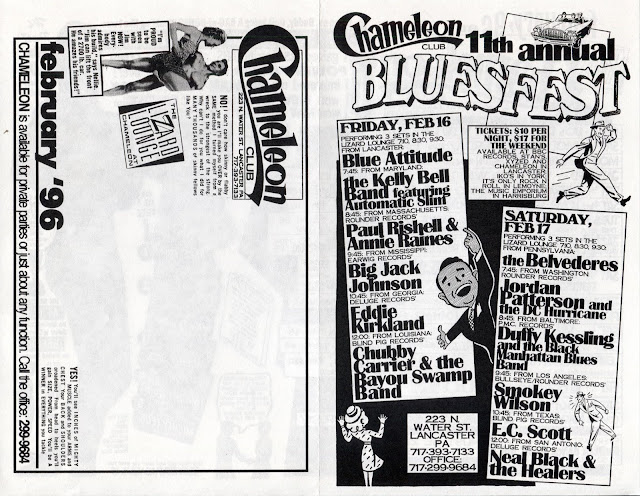 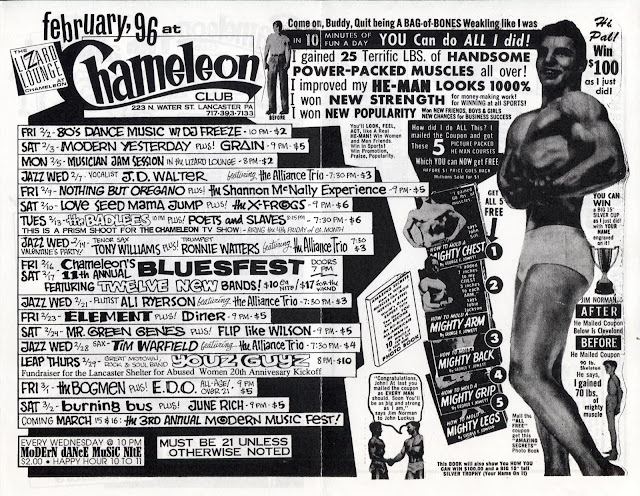 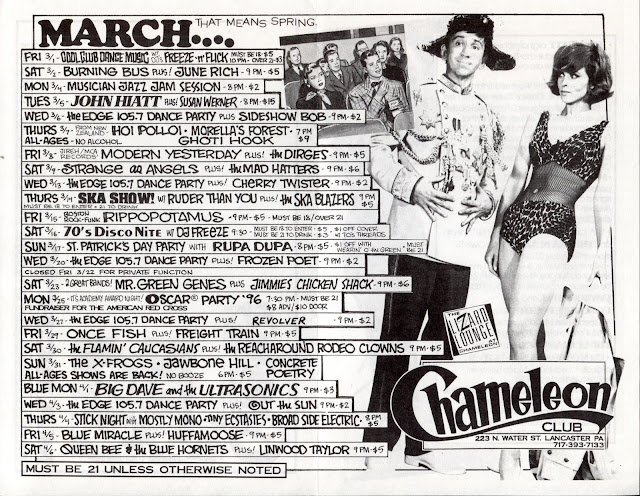 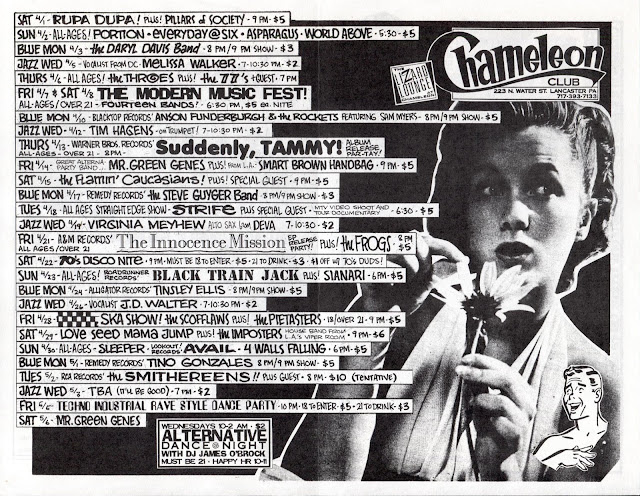 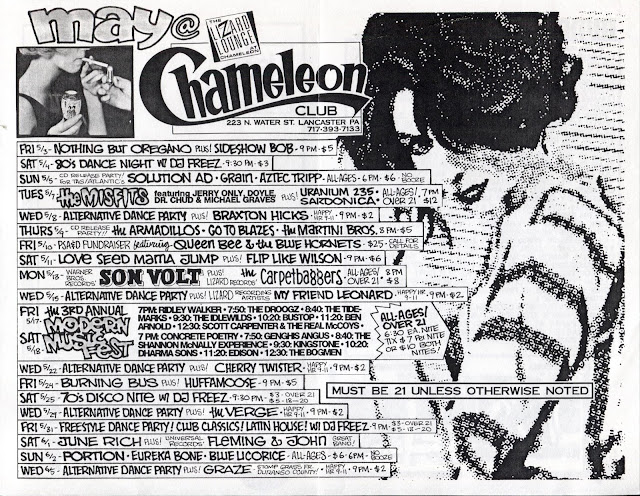 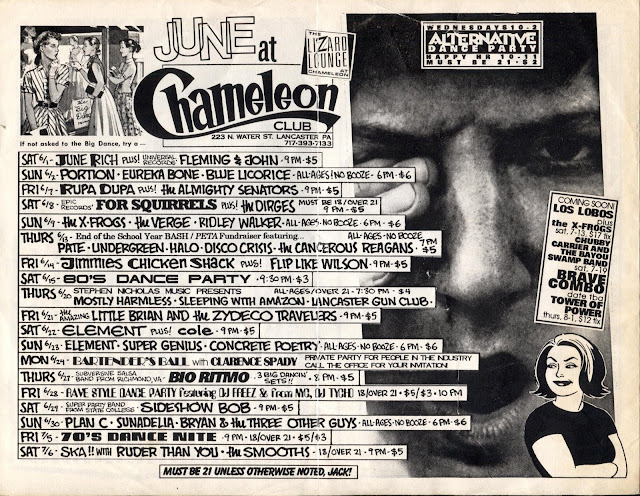 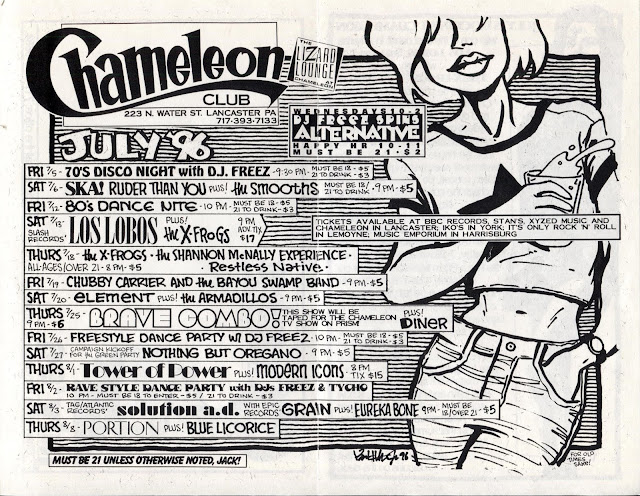 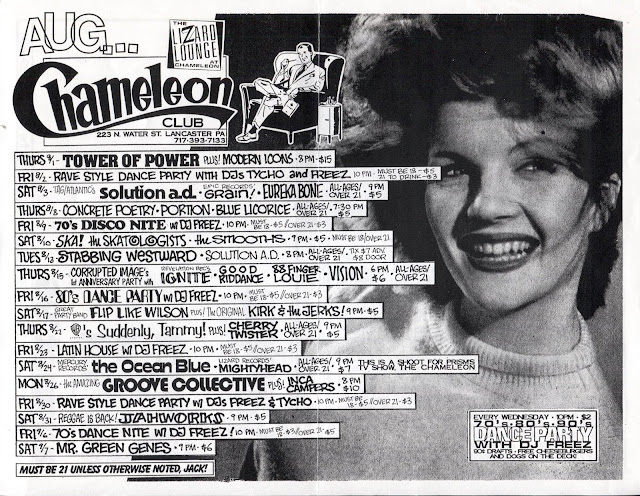 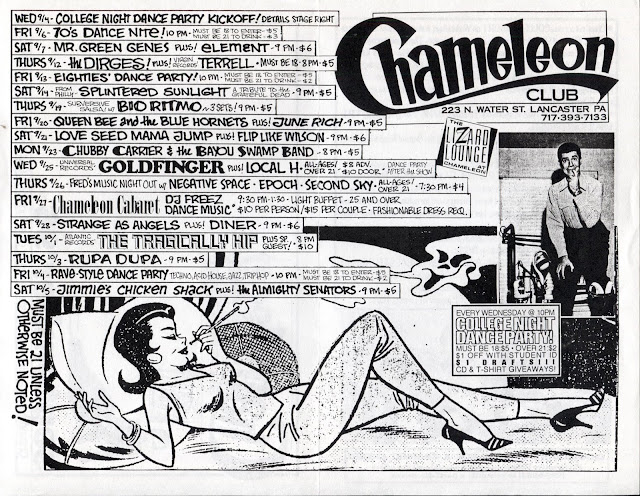