Recently, I saw a comment on an Instagram post about Jane Foster (Natalie Portman) picking up Mjolnir to become the God of Thunder in Thor 4 that whined about “damn SJW” versions of comic book characters (people were up in arms to a lesser extent when this happened in the comics four years ago). The conservative mandate is that Thor MUST wield a penis in addition to his mighty hammer. I was gonna weigh in on the post, but over a hundred other people had already taken this Alt-Right moron to task for his misogyny. Still, it got me thinking…

The Right tends to try to co-opt a lot of things they don’t seem to understand, from Johnny Cash to They Live to the Constitution of the United States. But when they try to lay claim to superheroes, well, now that’s going too far. 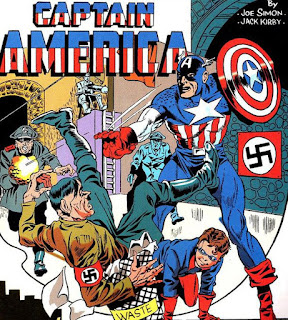 To those who are not versed in the genre, superheroes might seem to be a perfect symbol for the kind of nationalism espoused by the far Right: They are supremely powerful, and use their might to battle their enemies into submission. They represent order and the establishment.

But that’s an overly simplistic take that doesn’t really fit most of the iconic characters that are dominating pop culture today.

In fact, superheroes are more in line with activists and societal rebels than they are figures of authority. They use their individual gifts to work outside the system, to fight for a kind of justice that might not align with that of the police or the government. Heck, they even wear flamboyant costumes and kinky accouterments!

Even Captain America, as patriotic a character as they come, has butted heads with his country numerous times, both in the comics and in the MCU. Steve Rogers’ idea of America doesn’t always line up with The Man’s, which makes him an embodiment of the spirit of America, not merely a jingoistic symbol of whatever this country represents at the time. 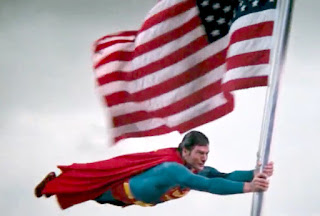 Similarly, and in some ways, to an even greater extent, there is a contingency that views the Man of Steel in a nationalistic light. Certainly, Superman has been depicted as an American icon… particularly during World War II (along with every other superhero), but also in the George Reeves television series, at the end of Superman II (when he replaces the flag at the White House), and in many other iterations. Fox News even threw a little hissy fit (imagine that!) when 2006’s Superman Returns rephrased the 1950s version of what the character stood for as “Truth… justice… all that stuff!”

But, as with Cap, to label the Man of Steel as a paragon of conservative American values is a huge mistake. From his first appearance in Action Comics #1 in 1938, Superman was a “champion of the oppressed,” often battling establishment figures (from corrupt public officials to dishonest businessmen and foreign despots). He was… LITERALLY… a Social Justice Warrior.

And yet when I did a little digging on the commenter who trashed the notion of a female Thor, it turned out that he sells Trumpesque merchandise, including a shirt bearing the word, “Superpatriot,” which—you guessed it—co opts the classic Superman logo, with the telescoping, curved lettering. 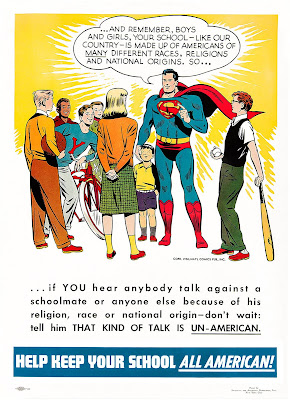 Dude. Not only is Superman NOT nationalistic, he’s the ultimate illegal immigrant as well as a journalist, and hence an enemy of the people! You rail against immigrants and poor people and anyone else you see as a danger to your precious White America. Don’t you get it, man? You’re a BAD GUY. SUPERMAN WOULD NOT LIKE YOU.

Superman has a long history of fighting against the kind of xenophobic rhetoric being spewed by so many Trumpers… DC Comics published many Public Service comic strips over the years depicting the Last Son of Krypton fighting against prejudice and intolerance. A few years back, a poster (repurposing a 1949 book cover distributed by DC) on which Superman tells a group of school kids that being racist is “UN-AMERICAN” went viral, inspiring DC to offer a hi-res version for free download on their website.

(Ironically, DC’s later PSAs in the 1970s and beyond were way more conservative, more concerned with warning against such misdemeanors as shoplifting, smoking, or graffiti than battling prejudice.)

And yet, there were some people who derided the Superman “All-American” poster as ANTI-American (to the point where Snopes even devoted a page to affirming its validity). We live in a time where people are so polarized that any online discussion of this kind of stuff instantly becomes a slinging of inflamed rhetoric on both sides… but, as we’ve learned repeatedly, there are NOT necessarily always good people “on both sides.”   I’ve quit most of the online comic book groups to which I belonged in part because I find it offensive that they ban ANY political content. Granted, like I said, it devolves quickly, but that shouldn’t lead to outright censorship of serious discussion, particularly when we are currently living in a time that has more than a little eerie and terrifying resonance with another point in the history of another country that didn’t end well. I understand the plight of online moderators who often have to put out these kind of fires, but outright censorship… just doesn’t feel right, gosh darn it. 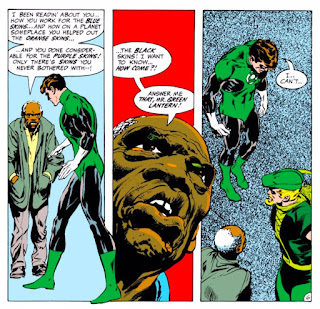 If there were social media in the 1940s, would comic book fan groups have shot down any posts about Captain America punching Hitler in the face? A decade later, would they have deleted any discussion of the McCarthyesque attacks on the horror comics? Would the classic Green Lantern / Green Arrow debate on social justice have been permitted as a topic of discussion on a Facebook comic book group in 1970?

The comic book Public Service strips of the past may have been so effective because of the medium… a short story on a comic book page in which Superman points out the evils of prejudice was able to take root in a kid because there weren’t hundreds of naysayers looking over their shoulder, screaming in their ear about immigrants taking away their jobs and undermining their values. It was just a good guy giving a good lesson to that one reader at that moment.

I’m posting a handful of the classic Superman (and one good Batman) PSAs (all ©DC Comics) below not just because I think they’re awesome, but there’s an ulterior motive as well.

Maybe, just maybe, some Alt-Right idiot doing a search on “SJW” and “superhero” will stumble across this page and be forced to view empirical evidence that, in fact, superheroes have ALWAYS fought AGAINST what those who would halt progress believe. Superheroes (not counting anti-heroes like the Punisher, Deadpool, Spawn, Rorschach., et al) are more than just adolescent power fantasies and escapist junk culture… at their best, they help to teach the difference between right and wrong, to look beyond our own purview, and inspire us to remember to always fight the good fight. 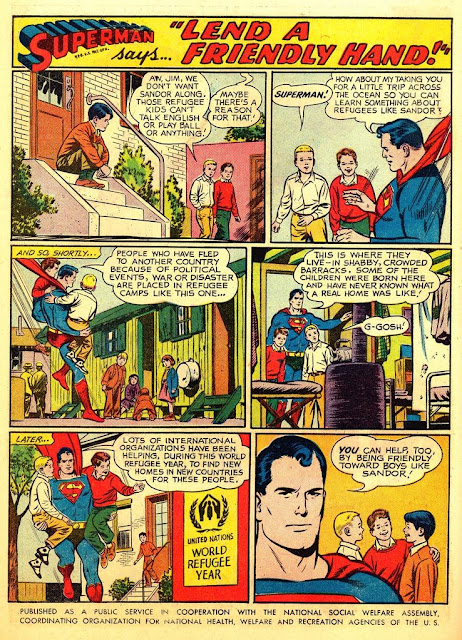 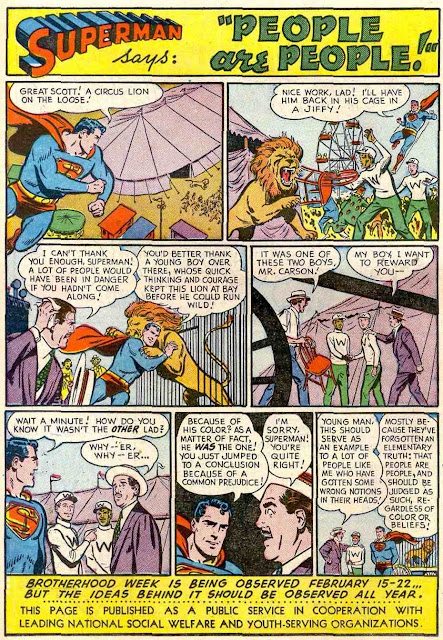 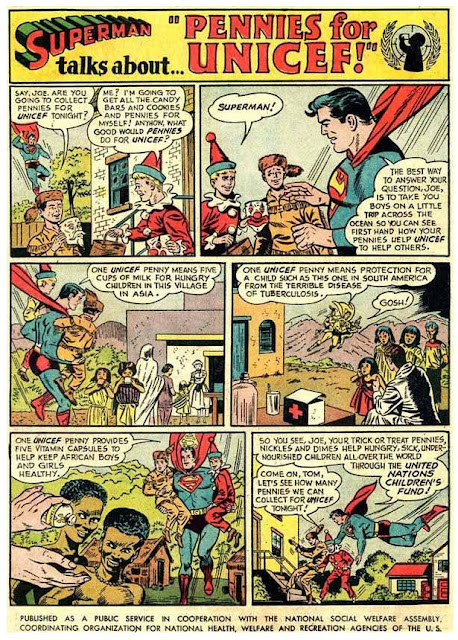 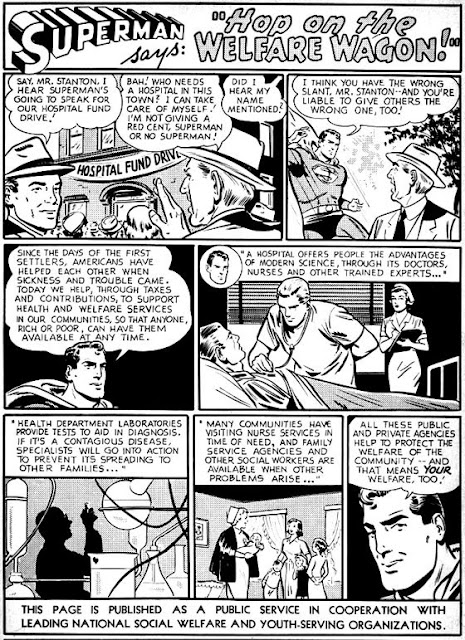 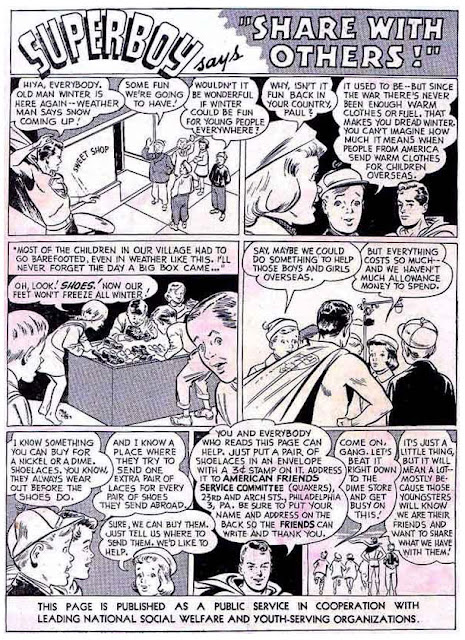 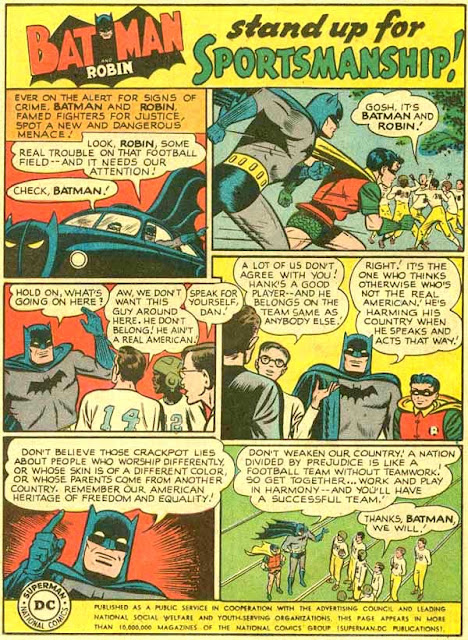