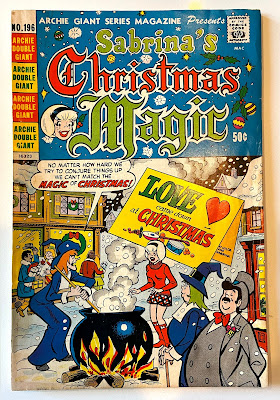 One of my favorite aspects of Christmas pop culture is Archie Comics, specifically holiday-themed books of the 1950s, '60s, and '70s (anything past that, not so much). I also have a very different, more ironic affinity for cartoonist Al Hartley's unintentionally wacky Spire Christian Comics of the 1970s, which strangely included a whole stack of books starring Archie and the gang all proselytizing Jesus with huge, googly eyes as seemingly psychedelic starbursts exploded around them. Seriously. Weird shit.
Hartley (1921-2003) also somehow managed to shoehorn some of his preachy stories into Archie's regular line. You'd be reading an issue of Archie's Pals 'n' Gals, and after a story about Big Ethel desperately trying to get Jughead to make out with her, there'd suddenly be a story about Betty lecturing Dilton that faith is more important than his scientific experiments! I guess that Archie (the company) either didn't care about mixing the secular with the sacred (Archie publisher John Goldwater was a religious man, although not a Christian) or maybe Hartley cut a deal with them to utilize overflow product that didn't make it into Spire's Archie line.
There is one specific Archie comic from 1972 that really feels like the Spire Christian Comic that wasn't, and it's pretty easy to figure out why Spire took a pass. The anthology comic, Archie Giant Series Magazine #196 spotlights Sabrina's Christmas Magic, with stories and features mostly by Hartley, sledgehammering the Christian "reason for the season." Sabrina helps Santa Claus regain his faith (!!!!), Betty reminds the reader that Christmas is "not just a holiday --- it's a holy day!," Sabrina's aunts learn that God's power is greater than their own mystical abilities, Archie and the gang become animals in a parable about not living "by the spirit of the jungle," and Dilton (of all people!!) scolds humanity for asking too many questions.
There are a few anomalies: The cover by Sabrina co-creator Dan DeCarlo could be interpreted as having religious meaning or not. In "Hot Dog with Relish" (also by Hartley), Sabrina turns Jughead's pet sheepdog into a long-haired hippie with whom Ethel falls in ill-fated (again!) love. "A Tree Named Obadiah" (by Frank Doyle and Stan Goldberg) is about a warlock-possessed Christmas tree. "The Spell of the Season" (also by Doyle and Goldberg) has Sabrina using her powers to make a group of bank robbers give all their stolen cash to poor people, who dance in the streets at their holiday windfall (hardly the message that Charlie Brown and the Grinch taught us!). And then, most bizarre of all, the whole issue is capped with a pin-up (by Hartley) in which Sabrina's accidentally denuded Mr. Weatherbee!
It's a schizophrenic bag, man, and I can't help but imagine that Hartley had mixed feelings about the end product. But I also have to imagine that the reason his proselytizing tales wound up in this mainstream comic is because of the title character: It's hard to picture Spire publishing a comic book in which the star was an active practitioner of witchcraft!
AGSM 196 is not a great Archie Christmas comic (nor is the "official" Spire Archie Christmas book, 1973's Christmas with Archie). In my own subjective (and atheistic) opinion, it can't hold a candle to the less preachy stories by Frank Doyle and illustrated by Harry Lucey, Dan DeCarlo, and Bill Vigoda (to name a few) from the decades earlier. But it's one of those comics that I love having in my collection. 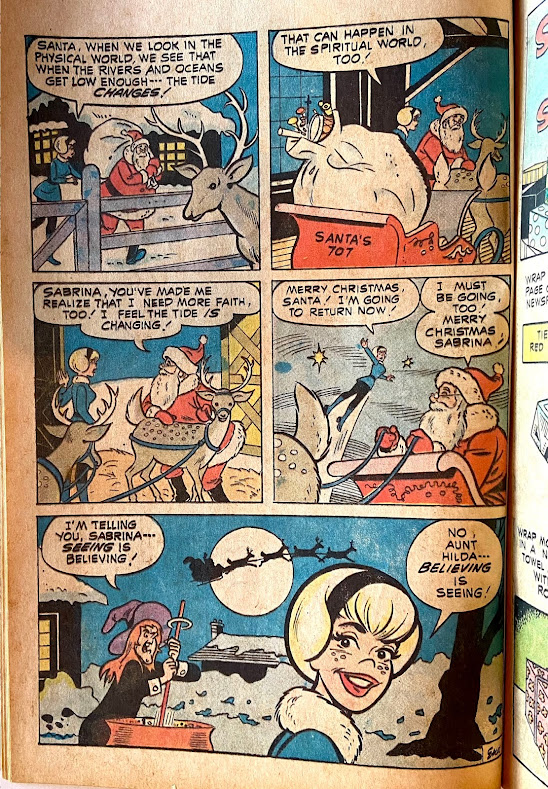 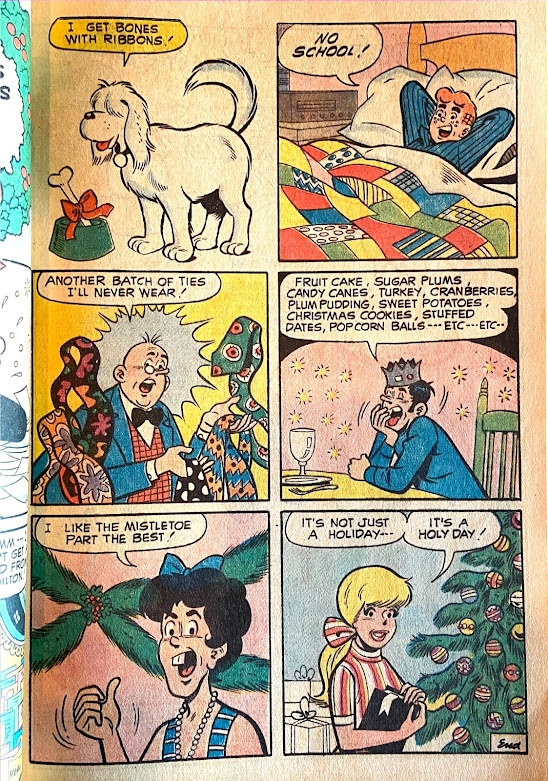 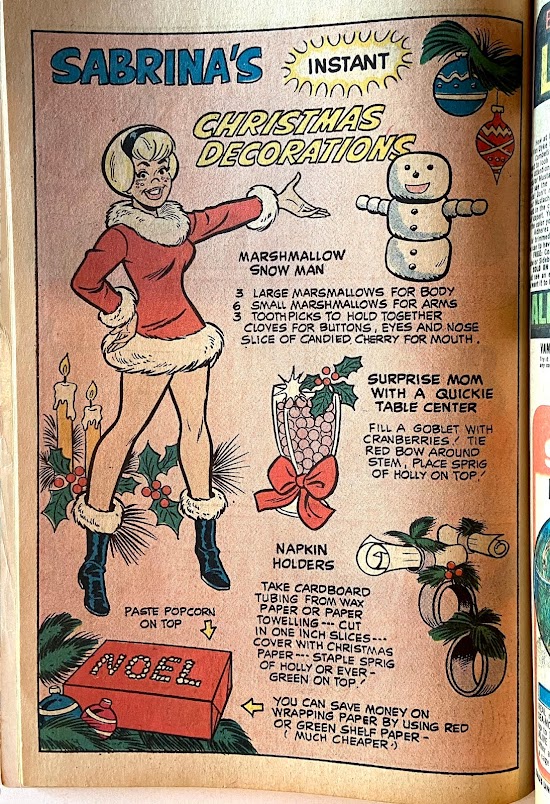 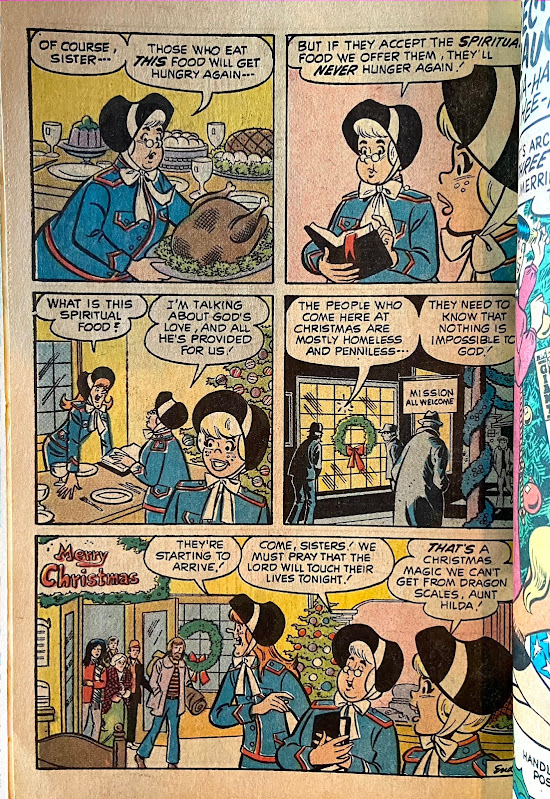 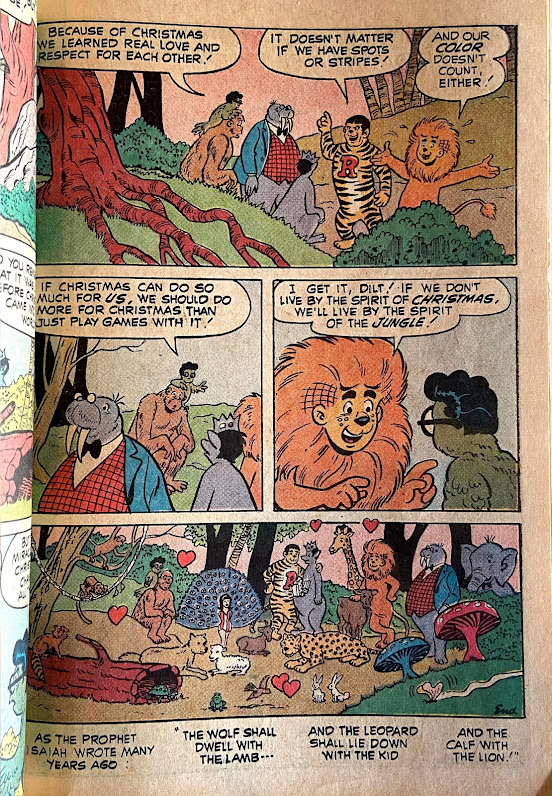 Glows in the Dark 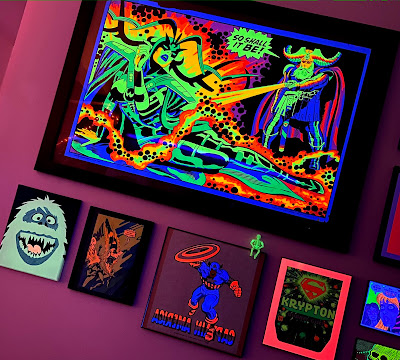 While way more commonplace than in decades past, adult toy collectors still face a certain stigma amongst the general public for a continued passion for things usually thought of as juvenile and best left in childhood. I live in a home that’s filled with geeky ephemera: thousands of comics and graphic novels, framed superhero and movie posters, shelves and boxes full of action figures, and more. But there’s one thing (actually, two) in my apartment that has drawn maybe more eye-rolls than even my display of hundreds of Superman toys: Two working black lights, one four-foot fluorescent tube hung in the hallway (“The Black Light Gallery,” as I call it) and a smaller one tucked away behind a speaker in the living room. Both of them are on more often than not, illuminating chosen aspects of my beloved collection of glow-in-the-dark and fluorescent toys and artwork.

I’m not sure when exactly my phosphorescence phixation—er, fixation—began, but I think it may have been with Pro Arts’ Kryptonite Rocks. Released in 1977, packaged in a box with a redrawing of the classic Wayne Boring Superman pose from Superman #53, these were simply chunks of white quartz rock covered with green fluorescent paint. But they instantly became one of my favorite pieces of Superman merch.

Around the same time, one of the neighbors, a married guy in his mid-20s, was starting to cast off the trappings of his youth, and selected teenage me as the lucky recipient of some of this stuff. One of the things he gave me was his four-foot black light fixture, which no doubt illuminated some fun times during his college days as an engineering student (he also gave me a big stack of early-1970s Playboy Magazines, but that’s another story!). I put the black light in the window sill in my bedroom where it served me well as the visual complement to my punk / new wave-fueled angst during high school. 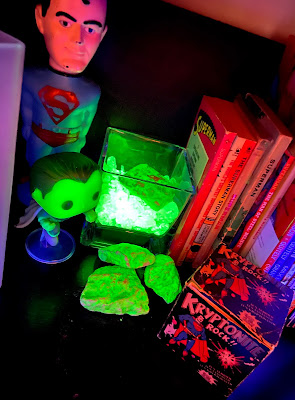 I painted my walls gray (much to the consternation of my mother) and covered the ceiling in glow-in-the-dark stars. I had a handful of black light posters, of course: The Marvel Third Eye Hela beauty (one of my most prized possessions to this day), A Christopher Lee Dracula poster from Dynamite Magazine, and a felt Capricorn poster, to name a few. I covered the windows in paper decorated with band and superhero logos hand-painted with fluorescent paint (I feel like I have to add that I abstained from one enhancement normal associated with this esthetic… I was not then—nor ever—a stoner. I got enough of a buzz just from the visual stimulation of this stuff [aurally abetted by the Psychedelic Furs, Lene Lovich, and Echo and the Bunnymen, to name a few]).

Curiously, the black light did not follow me to college, nor to my early apartments as I became an adult. It wasn’t until I got divorced at the age of 30 and moved to Hoboken NJ with my friend Rob that I resurrected this particular aspect of my arrested adolescence. I bought a small 12” black light and hung it in the small, enclosed passageway between the living room and bedrooms in our little railroad apartment. CD shelves lined the three-foot space, onto which I also placed some glow-in-the-dark toys. I framed and hung the fluorescent box top from Topps’ 1979 Krypton Bubble Gum and strung the glow-in-the-dark pirate skeleton that was a Cap’n Crunch premium in 1978 from the ceiling. But it wasn’t until two apartments and a decade or so later (after another relationship ended) that I deep-dove back into this particular aspect of my adolescence, hanging a new four-foot fixture in the hallway, across from a gallery of fluorescent posters and artwork (Hela once again basking in the full-on glorious glow of the black light).

But back to the toys: Aside from the ubiquitous skulls, skeletons, and super balls, there have been some instances of crossover between my comic book fandom and my affinity for glow-in-the-dark stuff: Kenner’s 1990 “Bio-Glow Swamp Thing” action figure (tying in with that awful animated series). A glowing Casper from a 1974 Cootie game (which lives in my guest bath). Two different figures of The Spectre (the 2000 DC Direct figure with him floating above the elongated cape is one of my favorite action figures ever). The 2007 Justice Lex Luthor figure is augmented with glowing capsules on his uniform. And, despite a deep antipathy towards Funko Pops, I couldn’t resist the Batman V. Superman glow-in-the-dark two-pack (even though they barely glow, darnit). 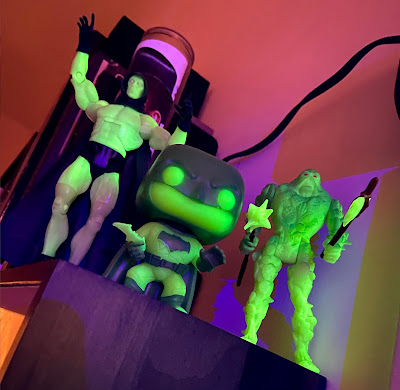 Other pop culture favorites that have been immortalized in fluorescence include the Creature from the Black Lagoon (love that 1963 Marx statue), Nosferatu (ReAction, 2018), and Alien (the Xenomorph figure and six pack of facehugger eggs both from NECA).

I once had a friend comment on an Instagram post of my black light gallery that she would “never understand” my affection for this stuff. Which is fine, as I always say, it’s all subjective. And honestly, unlike my passions for Peanuts, Superman, Alfred Hitchcock, and Frank Sinatra (on which I could write dissertations), I can’t fully explain what it is about all things glow-in-the-dark that I find so appealing. Sure, part of it is nostalgia, but that’s not enough to make me put all this stuff on open display. Maybe it’s connected to my affinity for the kind of comforting mood lighting that makes me one of those people who spends too much money on candles and has Christmas lights strung in various parts of the house year-round. Who knows. But, as with everything that people collect, the reasons don’t matter. I’ll happily suffer the derision of those who don’t get it because ultimately, all that matters is… I like it. And isn’t that was collecting is all about? 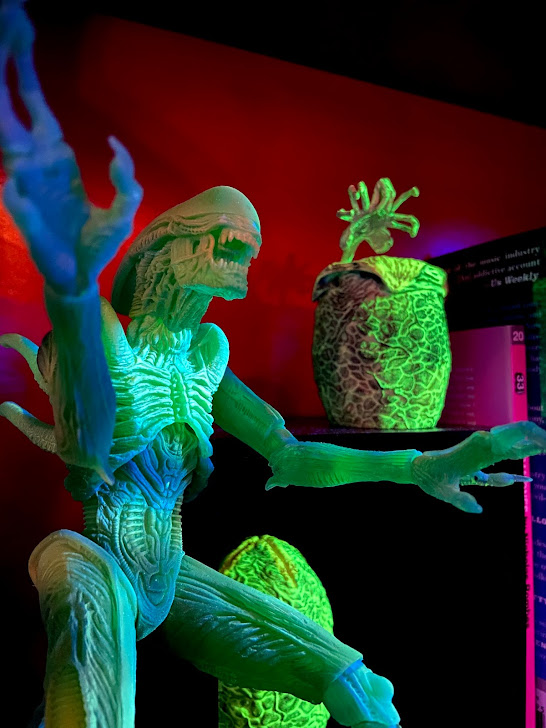 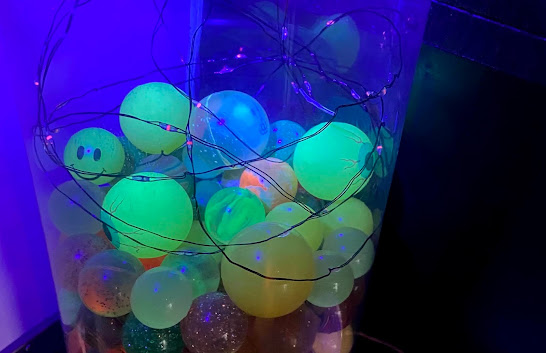 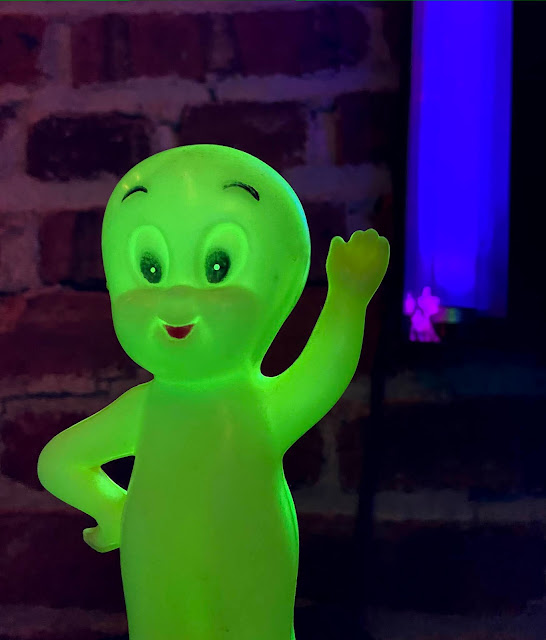 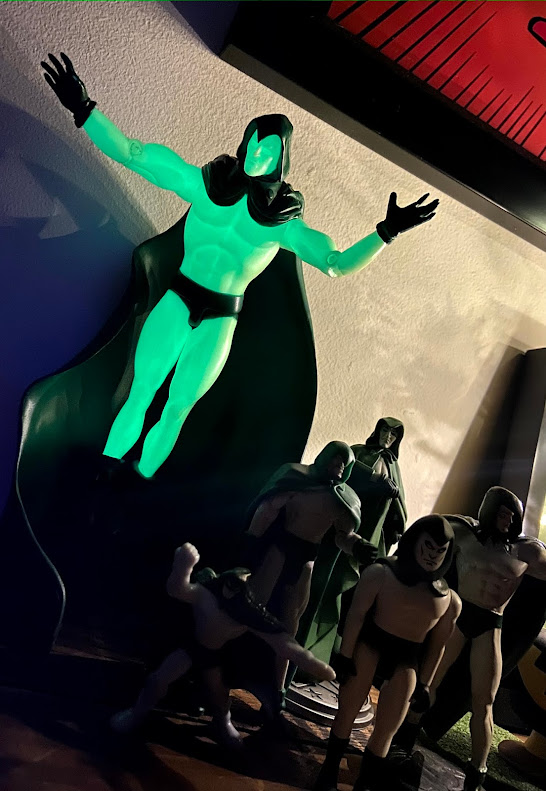 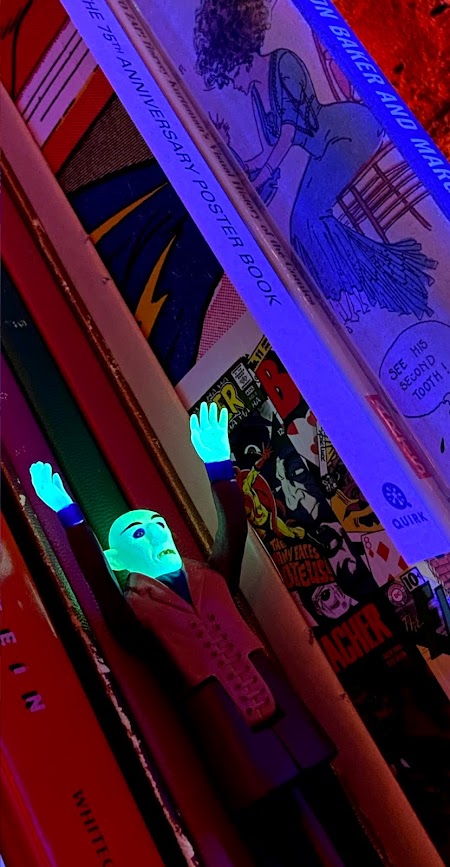 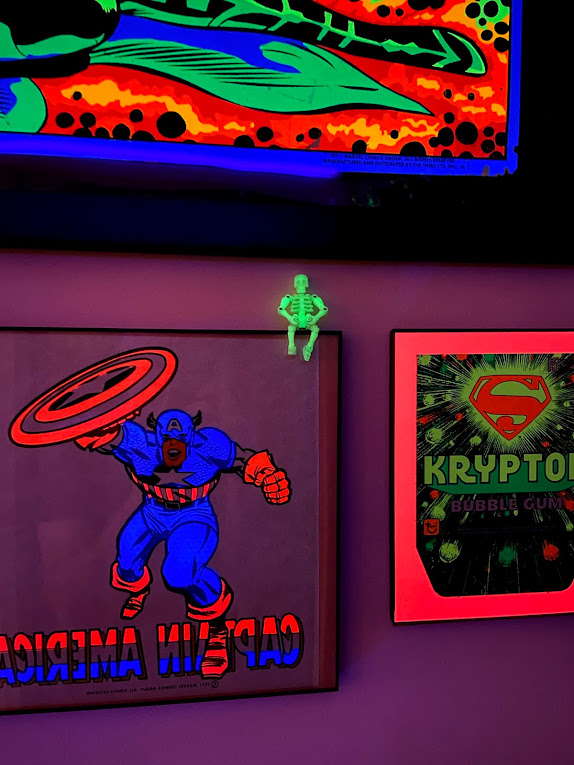 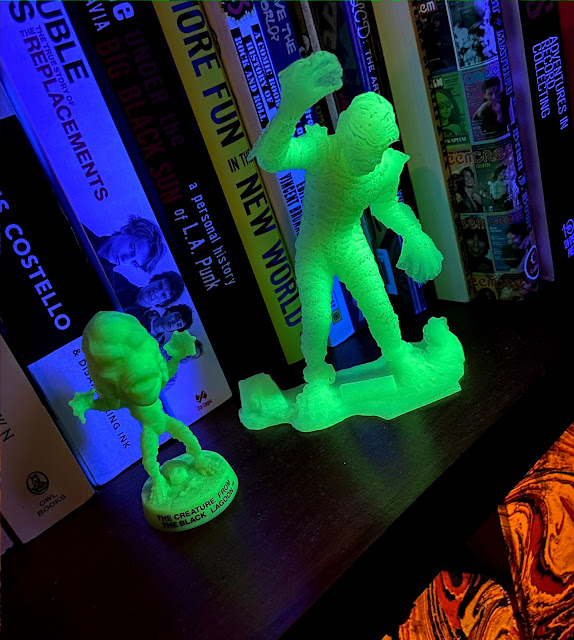